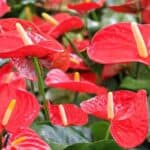 Are they real?” That’s what visitors would ask incredulously when shown over a thousand anthurium blooms in the greenhouses.

Their incredulity was due, of course, to the “strange” formation and texture of the anthurium blooms.

The Name Anthurium is Well Chosen

It means “tail flower” and refers to the prominent spike or spadix. This spadix contains the complete flower and is solely responsible for the plant’s reproduction.

The large, flaring, brilliantly colored, and glossy-textured “petal,” called the spathe, is merely a bract or colored leaf.

Anthurium varieties grown commercially are still in the luxury class of flowers, with good blooms selling in florist shops from about $2.50 to $6.00 or more each.

However, since the most attractive use of anthuriums is in an arrangement of two, three, or four blooms, their unique beauty may be enjoyed for several weeks at the same cost as a bouquet of some far shorter-lived hothouse flowers.

For a whole summer, we worked at a commercial grower’s establishment in California to learn how to handle these unusual plants.

In those months, we became thoroughly devoted to them—both became of the exotic beauty embodied in the unusual shape, satiny sheen, and rich color of their blooms and also because of their ability to keep from three to five weeks when cut—and since then the building up of our collection has deepened the original enthusiasm.

Nearly 600 known species of anthurium exist, although only a fraction of this number has been imported to the United States.

Our collection includes the following:

Their flowers range in color from deepest crimson through rose-pink, salmon, and pale pink, shading to green and from flat ivory to a gleaming patent-leather white.

The spadix with most varieties can be white, purple, yellow, pink, green, red, or varicolored, so the possible combinations are almost infinite.

We have found that anthuriums will keep longest if the flower is cut when the stigmas (the tiny knobs on the spadix) have a glassy appearance and the flower stem directly below the spathe is quite stiff.

The cut flowers should be set in deep water where it is cool, but not cold, for several hours before making arrangements or wearing them.

Arrangements can be classically formal, using the largest blooms, which may measure 5″ to 7″ inches wide and up to 10″ inches in length, or very modern, using the 3- to 4-inch blooms in a simple design.

Effective use of the small seedling blooms is in a corsage. No other flower I have ever worn has attracted more attention or enthusiasm.

One of my favorite species for flower arrangements—and one that every collector should possess—is Anthurium scherzerianum with its 3- to 6-inch de-flexed flame-colored petal or spathe and spiraled bright yellow spadix.

Other varieties of this species are white, rose, or “particolored white-spotted red. Scherzerianum will flower throughout the year, as will the commercially important species andraeanum and ferreirense (a hybrid of andraeanum and ornatum).

Besides this unusual property of blooming all year, anthuriums are relatively pest free, the chief nuisance being fillips which are readily controlled by a pyrethrum-rotenone or DDT spray. However, only dilute solutions should be used, or the new growth will be injured.

Seventy years ago, an English botanical magazine published color plates of anthuriums. Rather vaguely, the native habitat of the A. andraeanum was located in New Granada.

On present-day maps, New Granada has disappeared, and the countries of Venezuela, Colombia, Panama, and Ecuador are in their place.

Within these boundaries are the extremes of steaming jungle lowlands and the barren icy peaks of the Andes.

By discarding generalities, with patient search through scanty records and voluminous correspondence here and abroad, we finally garnered some facts about this species.

The “little red cape,” capital colorado, as the South Americans call andraeanum, grows from 2,000′ to 4,000′ feet in the humid lands between the high cordilleras of Colombia. It is no longer plentiful in the wild state, and rigid controls govern its export.

Nevertheless, many growers in this country obtained large collections of andraeanum by way of Hawaii, where they were extensively developed in lath houses before the war, and are now hybridizing them in this country.

The prices asked for Anthurium andraeanum plants fluctuate widely, but it is often a better investment to pay $10.00 to $25.00 for a three- or four-year-old plant on which you can judge the flower than to buy the cheaper seedlings because flower color does not always come true from seed.

Sonic species are more widely distributed and can be imported from Central and South America.

One of our correspondents in Colombia wrote of encountering several varieties of ornately flowered anthuriums, white with a wine-red spadix and some all white while picnicking on the banks of the Anehicivil River, which flows into the coastal swamp where the Pacific seaport of Buenaventura is located. This would be in a region of jungle heat and daily tropical rains.

All anthuriums will thrive if an attempt is made to simulate their native soil and atmospheric conditions. Since they come from Central and South American forests, they require a high humidity of 75% percent or more and fairly heavy shading, similar to that used for ferns, on the glasshouse.

There is a wide divergence of opinion among both amateur and commercial growers of anthuriums concerning the best medium for growing them. Several soil mixtures are used with equal success.

One commercial grower uses the old osmunda left from repotting orchids combined with chopped sphagnum moss and pea gravel for potting his anthuriums.

With this mixture, the plants are watered daily and given a light feeding of a complete chemical fertilizer dissolved in water every 2 or 3 weeks.

Perhaps the most popular mixture comprises equal parts of peat moss, oak leaf mold, and coarse sand, which can be added to a small quantity of well-rotted manure and charcoal.

An amateur grower in Santa Cruz developed a third mixture, which gives excellent flower production. He employs a combination of rough fibrous loam, chunks of well-rotted manure, oak leaf mold in which the leaves are only slightly decomposed, and shredded redwood bark. To ensure aeration, he includes a teaspoonful of quarter-inch earthworms in each pot.

The pot is watered every second or third day with dense mixtures.

There are several factors, however, upon which all growers agree—the soil should be well aerated; the pots or beds must have good drainage; the plants should be fertilized lightly rather than heavily. And the foliage should be wet down daily.

In the morning, while the greenhouse temperature is around 70° degrees Fahrenheit, many of the anthuriums whose stigmas are well developed emit a faintly spicy fragrance from the spadix.

Undoubtedly in nature, this is one means of attracting pollen-carrying insects since the stigmas mature before the anthers and the anthurium is most successfully fertilized by cross-pollination.

In the greenhouse, the thumb and finger can replace the tropical insects, and it is interesting to watch the development of the fertilized spadix.

Time-receptive spadix will, in 2 or 3 weeks, turn dark green and show a definite increase in size. It will continue to increase in size, both in length and diameter, to accommodate the swelling berries which contain the seed.

The seeds mature from four to nine months depending upon the variety, but it is easy to tell when they are ripe because the berries change color and loosen themselves from the spadix so that they drop off readily when touched.

The seeds require a fine fibrous mixture of peat and chopped sphagnum, which should be sown shallowly.

It is necessary to have a constant humid atmosphere and a temperature of 80° degrees Fahrenheit for the seeds to germinate. The seedlings remain in this hot, humid atmosphere until one fear has developed when, to guard against damping off, they are transplanted to small pots or flats.

There may be as many as 125 seeds on the spadix of a mature plant, although all of these will not germinate. One-third to one-half would be a good average.

In the course of two or three years, before the seedlings produce a bloom, many small divisions and suckers will occur so that at the end of that period, it is possible to have 200 or more seedlings from the original sowing.

From a cross of two red andraeanum may come color variations ranging from pure white through pink, salmon, orange and red, while the shape of the spathe may vary from flared but-Eerily wings to canoe-shaped.

Since the pollination of anthuriums and the production of seedlings is a laboriously long process, we usually increase our plants by taking divisions or suckers.

Divisions appear on the crown of the plant, and it is, therefore, important to keep moss built up around the stalk so that the roots produced just beneath each new leaf from both the main plant and its divisions do not harden off.

We wait until the division has three or four leaves before we cut it. Keeping the division at a temperature of 80° degrees Fahrenheit after it has been potted separately will help it become re-established.

A Popular Commercial Plant In The Future

Compared to most other flower crops, the labor required for anthurium culture is light, and they can be grown in almost any type of greenhouse.

However, buying a commercial collection of anthuriums would be very expensive since the capital investment would be disproportionately high compared to an equal greenhouse in roses or gardenias.

But for amateur growers with greenhouses, there are few plants or flowers that will yield more satisfaction and immediate response to attention than will the different species of anthurium. This is a flower for today in a world that stresses beauty and functionalism.