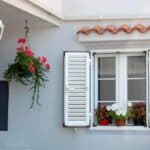 For air must circulate freely about them. A large 5-foot tray directly on the radiator itself supplements the water supply in the galvanized tray of the largest window.

About seven gallons of water are absorbed by the air in the apartment every day.

Hygrometers or humidity gauges are used to check the amount of moisture in the atmosphere. These register about 45% percent relative humidity during the best days of winter.

At other times, 50% to 80% percent is recorded, depending upon the room temperature and the humidity outdoors.

Regular spraying with clear water and natural transpiration from many plants in the apartment increases the moisture in the air.

All this increases the humidity to about twice that found in an average steam-heated apartment where no air-moistening devices are used. In addition to being better for the plants, it is far healthier for people.

A wet and dry bulb type of hygrometer may be purchased for about five dollars, but Mr. Kuester has made some at the cost of two thermometers. These are mounted neatly to each other at a distance of 2″ inches. One end of a wick is tied over one bulb.

The other end is inserted into a small bottle of distilled water, so the bulb remains moist. This provides the humidity gauge and is easy to make or read.

For begonias of the Rex type, orchids, and maidenhair ferns, which thrive in an atmosphere containing 75% to 90% percent relative humidity, Mr. Kuester has built a large Wardian case 4′ feet long, 3′ feet high, and 2′ feet wide.

This is also used for propagating plants. It is equipped with fluorescent lighting, which augments the daylight received from a nearby window since that is not sufficiently strong even for the shade-loving plants growing there.

Another important requirement is fresh air regularly supplied each day. The plant windows are lowered from above at least 6″ inches throughout the day.

This allows free air circulation, and yet drafts, which might injure plant life, cannot reach the growing material.

Correct watering is something for which one must develop a talent, Mr. Kuester insists. It cannot be taught.

First, one must understand the moisture requirements of each plant. Then one must consider the size of the pot and the material from which it is made.

The size and vigor of the plant, the temperature and brightness of the day, and the humidity of the air are all governing factors. Experienced gardeners have a sixth sense about this sort of thing which anyone sufficiently interested can develop.

The Kuesters do not submerge their pots in a pail of water to supply moisture. An unhappy experience with root nematodes, which spread from one plant to another by this method of watering, made them give it up entirely, and they now water from the rim of the pot.

This is done each time thoroughly until excess moisture runs through the drainage hole into the galvanized tray below. Then no water is given until the topsoil begins to feel dry to the touch of a sensitive fingertip.

The soil mixture used for most Kuesters’ plants consists of the following:

A stock of this is always on hand in the event new plants need potting or one of the others is inadvertently toppled over, which sometimes happens.

From time to time, Mr. and Mrs. Kuester like to experiment with newer materials for feeding and growing plants with which other enthusiasts claim to have had success. Part of the fun is keeping abreast of new developments in the plant line.

Mr. Kuester believes that newly acquired plants often suffer a setback before they become accustomed to their surroundings. A calla lily begonia I have recently acquired shows that to be so.

During the first 2 weeks after it was brought from the greenhouse, it went into a sad decline, lost several leaves, and looked dangerously near extinction.

At the end of that time, it began to take a new interest in life and is now definitely on the upgrade – the result of becoming acclimated to a different environment.

The 175 plants now thriving in this New York apartment had a small beginning. In 1936 Mr. and Mrs. Kuester’s collection numbered three or four bedding begonias and a pot of ivy.

The vast proportions to which this bobby has grown, against odds which would have thwarted less indomitable plant lovers, is indeed a spur to those who live in apartments and who had thought, until now, that it just couldn’t be done!