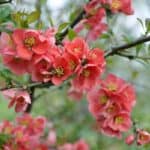 Many kinds of tree and shrub branches will come into leaf and bloom quickly ahead of the season if special attention is given to their preparation.

The best time to cut branches for forcing is on a mild day when the sap is near the bark’s surface. Trim out conflicting branches, pound the stems up to about 3″ inches, then immerse the entire component in a tub of warm water for several hours.

After this operation, put them in deep water and leave them in a sunny exposure until growth shows plainly. To hasten the bloom, spray with warm water every day.

Japanese quince is one of the favorite early shrubs of flower arrangers. The quince moves quickly, and its twisty, curving growth has a challenging appeal.

If the branches are carefully groomed, and the material is skillfully placed, it only takes a few components for the desired effect.

Illustrated is an arrangement of the bronze dwarf quince. A cup holder with water holds the stems placed very close together at the base as if they were growing from one stem. The large voids at the top give a pleasing and graceful pattern.

Some green and white leaves and evergreen succulents were used to conceal the holder and provide a natural finish.

The base is a dark brown bamboo mat long enough to accommodate the charming brown and beige ivory figures.

The figures are rare, but any similar ones could be most effective, or if the design were moved nearer the center of the mat, the procedure would be pretty without accessories.

Any other flowering branch could be used and needled evergreen branches or bare twigs could be arranged similarly.