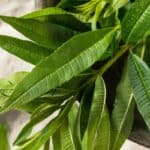 In the days of the old South, there was an herb called provincially, Citronalis, one of the most treasured of all of the grandmother’s sweet-smelling herbs.

In recent years, the name has been changed to lemon verbena, and it is so generally known today.

The bloom of this herb is inconspicuous, but the delicious fragrance of the foliage makes it unusual in its appeal.

The leaves, long and slender and of a yellow-green shade, are borne on graceful willow stems.

They have an intensely aromatic flavor with a lemony tang that suggests their present name.

Citronalis was put to many uses in the households of the past, both fresh and dried, because of its delectable odor.

In its fresh state, the green of the foliage was mixed in bouquets for additional scent, while if the company was expected, a leaf or two was always floated in the finger bowl for an extra touch of elegance.

Citronalis, being a tender perennial, was not grown in the garden but was kept potted so that it could be moved about at will.

It was cut back in the fall and brought into what was then called the “pit” for winter quarters.

Bunches of this fragrant herb were later hung up in the attic or in some warm, airy place where, when dried, they could be used for such purposes as mixing in the potpourri jar, making sweet bags, or perfuming the linen closet.

Since the younger generation may not understand, the “pit” just mentioned was really a forerunner of the modern greenhouse.

Instead of being built above ground like a greenhouse, the lower portion of the pit was excavated several feet beneath the earth’s surface.

Heating Arrangements Of The Pit

This was to make for warmth, as the heating arrangements of the pit were very crude, the only means for heating then being a small wood stove or antiquated oil lamp.

The portion of the pit above ground was a combination of wood and glass. The sides were of glass, as was the slanting roof.

This building was located in a protected spot, generally near the manor house, so that the mistress might conveniently care for the plants dear to her heart and too tender to be wintered outside.

These would consist of such plants as:

The name of the old-fashioned flower pit stirs nostalgic thoughts of yesteryear for those who remember it, together with the unforgettable aroma emanating from its depths if one were fortunate enough to be allowed to poke one’s nose inside.