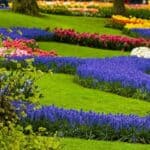 The English poet, A. E. Housman, reckoned his life span by the number of Springs in which he could see the wild cherry bloom along the woodlands. In America, by such reckoning, he might have counted himself immortal.

But how many Springs a year might he have estimated?

Somewhere, you may find Spring every day from January through to the end of July.

She is inconstant in her coming and going; she rarely stays anywhere longer than six restless weeks. Moreover, she dresses differently according to altitude and climate.

The Desert Spring is different from Spring in the fertile valley, as the flowers of the forest differ from those of the high mountain slopes.

Plants That Come With Spring

Spring mostly comes with jonquils and daffodils, snowdrops and crocus, hyacinths and anemones, colored primroses, and tulips. But this is the Mediterranean Spring – all these are stars of the European flora.

Yet beyond the city sidewalks and the confines of the garden, Spring comes with the American wildings. For some, it comes with the hepatica and the bloodroot.

For some, the fragrance of trailing arbutus alone is worth a Spring. But, for many, it means the dogwood and the redbud.

If you were as elegant as Ariel, you could encircle the Southern states in January to find the camellias leading the exotic Southern Spring, and you could go West and see the valleys of southern California flushed pink with almond bloom in February.

East or West, you could linger and either follow the Spring up the Eastern seaboard, through the Carolinas, and over the Blue Ridge until you came, at last, to see the lilac flowering in New England beside the farmhouse door, or you could follow it up the West coast to the Pacific Northwest.

March will give you daffodils almost everywhere, for daffodils mean Spring to everyone, to the city dweller and the countryman alike. I think they are in the East in their most beautiful setting in Virginia.

You may see them growing in a thousand varieties in the bulb fields between the waterways and forests of Gloucester County. And you can watch them threading their way and broaden into rivers of gold in old plantation gardens, where they have colonized and spread in their legions.

In the West, you may see them in the same abundance. They sweep down the grass slopes of Seattle gardens, where you may look across the Puget Sound and Lake Washington waters to the Cascade Mountain range beyond.

To look across these daffodil fields and see literally acres of daffodil gold and then to see beyond and above the great snow-capped mountains of the Northwest is the single supreme sight of Spring.

By choice, I would follow the Spring on the West Coast. But, I would start my journey in southern California in February with my foot set firmly beside that bright yellow flower Sanicula arctopoides, footsteps of Spring.

In March, I could find a score of Springs in central California. In the redwood forest, I would find the bleeding heart, the western trillium, and the faint, frail sugar scoop, Tiarella unifoliata, that covers acres of the forest floor in company with such flowers as the yellow violet and the glade anemone, Anemone deltoidea.

Along Sierra streams and canyons, I should find the western dogwood, Cornus nuttallii. In Napa Valley, I could look over the cross-stitched landscape of orchards and vineyards and see the mass of white prune blossom above the yellow mustard.

I could see Spring come over the coastal ranges’ green hills from March to April.

I would find the filaree geranium, the brodiaea and gilia, the tidy tips and owl’s clover, and the buttercups among a host of flowers.

But Spring comes with her most excellent flourish in the blue sky lupine and the gold of the California poppy.

They are constant companions, but sometimes a hillside will appear pure green-blue and sometimes just pure gold.

They say the poppy blooms most abundantly on land seared by fire. But the poppies are flowers of fire, for they come like tongues of flame licking the hills and bluffs of those coastal ranges until, at the height of their flowering, they set whole hillsides afire with their molten bloom.

Who can describe this fire poppy that is as beautiful individually as it is in its millions? It is neither gold nor yellow; rather, it is a bright sun-spilled copper color with a sheen of luster.

I like to remember John T. Howell, Curator of Botany at the California Academy of Sciences, said of this poppy in his Maris Flora: “Cherish it and be forever thankful that such a rare flower is so common.”

Up through the redwood country of Northern California in May, the Scotch brooms bludgeon into another gold; not the poppy’s molten gold, but the sun’s pure yellow gold.

Further North, through the coastal region of Oregon, the grassy hillsides are full of iris and violet, and the forest areas massed with the lovely, fragrant, western azalea, Rhododendron occidentale, and its cousin California rose bay, R. macrophyllum.

Inland, across the Willamette Valley, the blue camas, or camassia, and the larkspur will be in flower. Throughout the Columbia River country those three most lovely shrubs, the mock-orange, the ocean spray, and the flowering currant, abound.

Finally, in mid-July, you can find the last Spring of the year bursting in the high places of the Pacific Northwest, a land of great waters and great mountains.

You can explore the Cascades and the Olympic Mountains, but the most easily accessible, and perhaps the most spectacular, flower fields are those of Mount Rainier.

It is not easy to comprehend the immensity of Mount Rainier. Certainly, it is the greatest mountain in the Northwest, but it is still only one mountain in a land of mountains.

As you go up through the somber forests, you find Spring still in the trillium, the miniature dogwood, Comm Canadensis, and its wood-loving companions.

Still, it is on and up that you must go to the Hudsonian meadows of the 5,000’ to 6,500’ feet range to find what John Muir described as “the richest subalpine garden I have ever found, a perfect floral Elysium.”

In A Background Of Snow

There, below the perpetual snow, you may watch Spring in bewildering beauty.

The white avalanche lilies, Erythronium montanum, the fawn lily, E. parviflorum, and the western anemone, A. occidentalis, flower first, springing into bloom at the very edge of the retreating snowbanks.

In a few days, the ground that was white with snow was white with lilies. This is the most ephemeral, perhaps, the most beautiful moment of that mountain Spring that merges so soon and almost imperceptibly into the short alpine Summer.

The elk slip marigold and the rose-red Mimulus border the cascading streams of melting snow.

Here and there, the lilies linger on northern slopes and in the shade of mountain firs. However, on southern slopes, the predominating yellows, blues, and reds of buttercup, lupine, paint-brush, penstemon, and larkspur, girdle the mountain with a broad ribbon of color, and the so-called heathers, the red Phyllodoce empetriformis, and the white Cassiope mertensiana, carpet acres of ground.

Higher still, in the Arctic-alpine zone, between 6,500’ and 7,500’ feet, the true alpines bloom. You will find the Lyall lupine, the gold fleabane, saxifrages, and the sweet-scented alpine phlox growing miraculously in the seemingly inhospitable volcanic shale.

By the end of August, the flowering year is over; six weeks from Spring to harvest. The color ebbs; the seed is set.

There Are So Many Springs

I do not know. Sometimes I think the Spring of the deep South is too opulent. There is something impersonal in the wax-like camellia, something too sentimental in the thick impasto scent of the gardenia, something too imperial in the brilliance of the azalea.

And there is something almost too dramatic, too brightly lit, about the California Spring.

It comes swiftly and vividly as an open flower under the sunlit blue sky before you have had time to see Spring’s promise in the opening bud.

Perhaps it is that, as a northerner, I think rather of the virginal whiteness of Spring as she comes shyly through the woods in the white drifts of dogwood and the misty carpeting of spring beauty.

And I do not know where else you may find her, still reticent, still frail, and yet so late, as in the high places of the far Northwest.