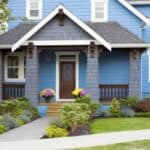 Entrance or approach plantings for present-day houses offer more of a challenge than some homeowners realize.

The ancient practice of setting out a few shrubs, a vine, or a tree near the entrance of a house has been commonplace for centuries.

This seemingly artless custom, apparently traditional and without a plan, usually resulted in a dramatic effect which -was enhanced with time. But with the arrival of the landscape gardener and new architectural trends, notions about such plantings changed.

Not so many years ago, foundation planting became a household phrase for every property owner who built a new house or remodeled an old one. As soon as the ground was ready for planting, an effort was made to skirt the foundation of the house with an irregular line of shrubs.

These plantings consisted mainly of evergreens and very often contained little variety. Usually, a staggered row of spruces, hemlocks, or arborvitae in neat pyramidal or globular forms was typical.

These evergreens looked rather pleasing for the first few years after planting, even though the effect was monotonous.

Then, as they grew, they were either barbered into grotesque forms or allowed to develop (after their heads were lopped off) in a dense mass, causing the homeowner to play peek-a-boo with all who approached.

However, not all foundation plantings fall into this class, but for the most part, the poor ones far surpass those in good taste.

The influence of the low-slung house often referred to as the ranch type, has changed the pattern for entrance planting.

At long last, there is an opportunity for more extraordinary ingenuity in using plants. As more low-growing plants become better known, plantings will be significantly improved.

Clipped evergreens have been used principally in the contemporary house featured on the opposite page. The low hedge above the wall, also of yew, is trimmed to keep the desired scale.

The groups of shrubs along the walk include dwarf-spreading yews, azaleas, and the red-leaved barberry. Additional color has been introduced with tulips.

During the summer months, annuals, mostly petunias and geraniums, are used to achieve the same effect. The wall of the house has been softened with the small-leaved Virginia creeper.

The entire planting, decidedly tailored in treatment, has been kept in scale with this low, rambling house. A large weeping willow at the extreme left (the owner’s choice) provides shadows against the house and across the well-kept lawn.

Stately elms and picturesque locusts on the slope behind (not visible in this picture) acid materially to the setting.

Tailored plantings of this type require constant care and the professional use of the shears to keep the plants pleasing in appearance and scale with the property. Furthermore, the clumps along the walk will need resetting as the individual specimens develop.

Plantings like this bespeak pride and help to set the pace for better maintenance and more effective planting notions in the neighborhood.

Climbing Roses For A Pop Of Color

Climbing roses are also used on the low fence and flowering shrubs and perennials, blooming at intervals throughout the season, add additional color.

A pair of English boxes on either side of the front entrance lends year-round interest to this delightful little garden.

The plant’s ultimate size and requirements must be considered when selecting shrubs for entrance plantings.

Providing proper space at the time of planting is also of primary importance. How these shrubs are pruned and cared for will determine their longevity and how they will enhance the house in future years.

For the most part, where budgets are limited, it is best to start with a few carefully chosen hardy plants and add to the planting as income allows.