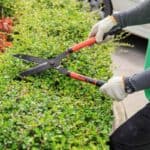 In these articles of mine, which FLOWER GROWER prints and illustrates, I have referred continually to my home place, Breeze Hill, because it provides my closest touch with the things I write about.

To be sure, the automobile gets me about to see things elsewhere, but the Breeze Hill touch is the dose one.

In considering the development of Breeze Hill, I am carried back to the days when the residential district in Harrisburg known as Bellevue Park was the fortunate outcome of conferences between public-spirited citizens and a most admirable landscape architect, Warren H. Manning, now long deceased.

Mr. Manning was a far-seeing worker who devoted much of his life to unpaid efforts for national and local civic betterment.

Long before automobiles were plentiful, he was planning better highways than we have. Through Mr. Manning’s actions, Bellevue Park was designed to be permanently nuisance-free.

The street plan was made on contours rather than the professional T-square idea. In addition, all poles and wires were forbidden since the wiring went underground.

Stores within the park were prohibited, with easy access to commercial establishments not far away. So, too, were obtrusive fences between properties.

No “small” lots were provided, and the best principles of zoning were exemplified in what worked out as deed restrictions.

These plans and regulations have stood the test of upbuilding for nearly 40 years with the most admirable results and unusual security against future aggressions.

My reference to the planning and development of Bellevue Park has been mentioned as a sort of preface to what I shall have to say about “living fences” for property separations.

When Breeze Hill was being planned, I was especially interested in barberry I greatly admired. However, my primary desire was to have a living fence of roses.

Still, I was talked out of that and instead planted two right-angle hedges of Berberis thunbergia and a third connecting boundary hedge with B. Vulgaris.

Excellent plants were obtained, and the planting was done with great care to ensure that these hedges would prosper.

They prospered entirely too much, for I had failed to take account of the double spread, which eventually took 4′ or 5′ feet inside the hedge and nearly as much outside it.

Planted in 1911, these three hedges were removed in 1937 by being plowed out. Their removal was not due to any fault of the plants but to the encouragement we had given them to grow.

To preserve our barberry beauty, the drive entrance to the place was planted with a beautiful dwarf upright barberry, Barberry mentorensis, opposite it, Barberry thunbergia.

Both, however, were kept entirely in good order by careful pruning. Another barberry hedge was started with the beautiful dwarf evergreen Barberry verrueulosa with satisfying results.

The right-angle hedges of the Japanese barberry were replaced with even, symmetrical plants of Taxus cuspidate, which were intended to give me a permanent evergreen street separation over which anyone might see what was inside.

But we made just one mistake: I wanted these hedges to prosper but not grow as the barberry rose, so the carefully dug trenches they were planted were not heavily fertilized. I have seen this error, and anyone using this lovely taxus should note that it needs to be fed.

My dream of a rose hedge came to life with the 585′ foot curved border, which forms our southern boundary. I found it was possible to get some well-made farm fencing material from which we could construct a reasonably inconspicuous base on which to train roses. The roses were then sentimentally selected and have since been so maintained.

This rose hedge is called the Walsh Memorial Hedge. It is a tribute to the hybridizing genius of M. H. Walsh, who, in charge of a great estate at Woods Hole, Massachusetts, carried out his hybridization toward hardy and effective climbing roses while producing varieties that invariably won most of the prizes when shown at Boston and New York.

Mr. Walsh had a refined taste in names so that in my search for hardy climbing rose beauty, I could avail myself of his Excelsa, Hiawatha, Lady Gay, Milky Way, Paradise, and Troubador, among the 41 varieties he recorded.

Unfortunately, when M. H. Walsh died, his successors did not realize the value of his accomplishments. But another rose friend of mine, Stephen F. Hamblin of the Lexington (Massachusetts) Botanic Garden, had some of these roses, and I could buy others.

Between us, we have conspired to get as many representatives of Mr. Walsh’s introductions as can be had into this Breeze Hill south hedge, and each year it becomes more beautiful and more representative.

It takes no more time and trouble to tie the shoots of these vigorous roses twice a year where they ought to grow on the provided wires than it would take to develop and prune a hedge anywhere, and I am frankly proud of the success of this Walsh rose hedge as a living fence.

The same treatment could be given to other climbing roses, though selecting those known or believed to be hardy would be preferable, which would make a bluff at reblooming.

Incidentally, I do not conceal my belief that we do not want continuous-blooming roses in eastern North America except those that nature has designed for that service.

Evergreens For The Living Hedge

Now I must return to the evergreen side of the living hedge. Many people agree that the most beautiful American evergreen is the hemlock, or hemlock spruce, which still dominates the forest beauty of the ancient woods in Pennsylvania.

Tsuga canadensis is easy to grow, and it is easy to transplant if one considers that, in common with other evergreens, the roots must be kept moist during the transplanting operation.

At Breeze Hill, we have a living fence of hemlock, pruned to a consistent quality, and is of the species’ beautiful, deep green characteristic.

The same treatment could be given to other evergreens, though I cannot see a good living fence made out of pines or any other of the more coarsely twigged conifers.

It is unnecessary to specify individual plants because the hedge treatment may be given to so many beautiful things.

For example, I saw a great lilac hedge that was more than 60 years old and of great height and width, which was a living hedge in a mountain village.

Almost any desirable and vigorous shrub can be worked into a living fence with care. I suspect success will surely follow if one experiments by making and remedying mistakes that most of us get on-best.

A visit to that gracious expression of admiration for Colonial American beauty, the restoration of Williamsburg in Virginia, brings in a most interesting living fence in the shape of what is called Beech hedges.

These are made of the English or European beech, Fagus sylvatica. This species can be quickly grown from seed if one can keep the squirrels and mice away.

If transplanted frequently to prevent the development of the expected long taproots, young plants can be carefully clipped to develop foliage whose beautiful appearance is impossible with roses, evergreens, or barberry.

This beech is one plant that branches quickly and does not tend to make long shoots. If the young plants (which I need to figure out where to get) are set out and pruned sedulously, the result with either the green beech or the purple beech will be genuinely unique.

This task, however, is another of those specialties that are best carried out by those who take a genuine interest in doing something worthwhile.

As to maintenance, living fences are less costly than dead ones. And if a cautious friend calls attention to the fact that my rose hedge is on steel, which is vulnerable, I shall admit it, though I can say that having bought carefully, I have not been troubled with too much rust.