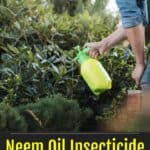 In recent years, gardeners have become increasingly frustrated by the emergence of superbugs – pests that have developed a natural resistance to pesticides.

Insects are among the most adaptable, rendering many chemical insecticides useless. Additionally, chemical solutions tend to harm beneficial critters and sometimes even the plants they’re used on.

Thankfully, natural remedies remain effective, and neem oil continues to be one of the best.

A natural extract of Azadirachta indica, neem oil for plants has numerous ingredients that can affect harmful insects.

Best of all, when used right, it’s safe for most plants and won’t harm beneficial insects or the environment.

How To Use And Apply Neem Oil Insecticide

There are two considerations when using neem oil: the type of neem and desired effect.

By understanding the three types of neem, you can use the one which best protects your plant.

100% percent cold-pressed neem oil is the purest form of neem and is extracted primarily from the seeds but can be found in all parts of the tree.

This form of neem oil contains Azadirachtin, which has numerous effects on insects when ingested.

It can interrupt the growth cycles, cause infertility, and trick the insect into thinking it’s full so it will starve itself.

Raw neem is too strong for topical applications, so it’s used primarily as a soil soak.

Take 1 teaspoon of Dawn dish soap or pure castile soap and gently stir it into a quart of water.

This emulsifies (breaks the surface tension of) the water, allowing you to mix in oil.

Next, add one tablespoon of raw neem oil to the water.

Finally, pour 2 to 3 cups of the mixture around the base of the plant.

Because it soaks into the soil, the neem is able to kill many subterranean pests without affecting earthworms.

Additionally, it is absorbed by the plant and becomes a systemic insecticide which can also kill many forms of fungus and bacteria.

Only pests that pierce your plant’s skin will be affected by the insecticide, which will continue to be effective for up to 22 days.

Thus, you only need to reapply the soil soak once every three weeks to keep your plants protected.

They contain a lot of great nutrients for your plants, as well as trace amounts of Azadirachtin.

Simply break up the neem cakes and apply as directed on the package when fertilizing your plant.

The cakes do a great job of controlling grubs and other subterranean pests without harming earthworms or other beneficial critters.

When the Azadirachtin is removed from raw neem, it becomes clarified hydrophobic neem oil.

This form of neem has between .5 and 3% percent Azadirachtin content and is safe for use topically.

The primary effect of using this form of neem is its ability to clog the airways of insects, suffocating them.

It also dissipates within 45 minutes to 1 hour, leaving behind no harmful residues.

Add 1 teaspoon of clarified neem oil to 1 quart of emulsified water and place it in a spray bottle.

The key rule to using this spray is to only apply at dusk and dawn so it’ll be gone before beneficial insects become active.

Leaves must be thoroughly soaked, especially the undersides of leaves.

Repeat every other day for two weeks or apply twice per month as a preventative.

Always test a small area of your plant 24 hours before using neem oil to test for allergies or other sensitivity.

Also, avoid using neem oil product near water features which have fish or other wildlife, as the oil can be mildly toxic to aquatic creatures.

Finally, never spray near a beehive, as the wind may carry droplets to the hive, potentially exposing bees to the insecticide.