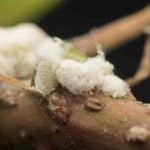 Sooner or later, every indoor gardener finds that his collection of houseplants has an exuberant crop of insect pests, seemingly moving in overnight.

Of course, the insects don’t just appear—they have to get into the house by some means.

“Where do they come from?” queries the house plant enthusiast, almost as often as he asks, “How can I get rid of them?”

How Do Insects Get Into House?

The most common way for them to get into the house is via new plants or cuttings. Unfortunately, the friend who, in all kindness, gives you a cutting of a favorite plant may unintentionally not be a friend after all.

I have received cuttings that failed to reveal signs of insect pests even after the most careful examination.

Yet, within 3 months, these same plants were covered with mealybugs in all stages of development.

The same thing can happen with several other kinds of pests for the eggs, and other early stages of some insects are not easily found. But, given time to develop, they will make themselves plainly visible.

Some commercial propagators unknowingly send out plants on which there are one or more kinds of insects.

These propagators may use regular control measures in their greenhouses to keep the insects down, but these do not eliminate the pests entirely.

Once these controls are stopped, such as when you buy the plant and bring it into your home, the insects multiply.

To be on the safe side, isolate any new plants or cuttings until you are sure they are free of bugs. You can’t go wrong regarding every plant with suspicion, regardless of its source.

The same thing can be said of plants that are moved in from the porch or garden where they have spent the summer months.

Outdoors are exposed to all kinds of insects, and some of these may come into the house with them in full.

Careful inspection and even precautionary spraying or dipping of your plants as they are brought in may result in less trouble with bugs during the winter.

If care is taken, other sources of insects may be eliminated. For instance, many may be brought indoors on dirty plant containers and plant stakes.

Mealybugs can go into a semi-dormant state on pots or stakes and live until another plant is available for food.

Mites and the eggs of other insects are carried over in this same manner. So you see how necessary it is to wash out containers and sterilize them with boiling water before using them a second time.

Burn old plant stakes rather than bother with cleaning them. Insects may come into the house on cut flowers, especially if these are from the garden.

Aphis may fly in through open doorways in spring or fall when they produce their winged stages most freely.

Even though we know all this and do all we can to protect our plants from bugs, some will still show up from time to time.

What Are The Plant Pests?

If you learn to recognize plant pests in the early stages and know just what to do to eliminate them, you will be able to save many of your favorite plants.

House plant insect enemy No. 1 is the mealybug. When mature, it is about 14-inch long, oval in shape, and covered with white waxy powder.

Its body is also covered with numerous hairlike projections. Mature adults move about freely until ready to lay eggs, at which time they spin a cottony mass and deposit from 300 to 500 eggs.

Mealybugs do not develop into a winged stage, but they may spread from plant to plant by contact or get on clean plant fronts, dirty containers, or old plant stakes.

When feeding on many plants, they excrete a sticky substance called honeydew. If this material is not washed off, it becomes a medium for the growth of a black-sooty fungus that further detracts from the plant’s appearance.

Honeydew also attracts small ants, and, in turn, the ants furnish the mealybug with transportation to other plants.

This relationship between ants and plant insects is widespread, especially in the garden.

Preventive Measures To Keep Bugs From Being Mature

Any control measure that prevents the bugs from reaching the mature egg-laying stage is helpful.

One of the better contact insecticides for mealybug is Volck, a miscible oil spray. One tablespoon of Volck in a gallon of warm water makes the right proportions for a spray.

Better still, make enough of the spray material so that the plants to be treated can be inverted and dipped In the solution. Several treatments may be required to clean up a severe infestation of mealybug.

Keep successive treatments at least three weeks apart to lessen the danger of injury to plants. If you have trouble obtaining Volck, hook for it in your seed catalogs.

Thrips are those tiny insects so troublesome on the iris, gladiolus, and other garden flowers.

They are also troublesome on many houseplants. Thrips seldom measure more than ½” of an inch in length.

They are slender and vary in color from green or white, in the young insects, to brown or black in the adults.

The injury caused by thrips is so characteristic that their presence is easily recognized. They feed by scraping the epidermis of the leaf and sucking the sap front bruised cells beneath.

Most Affected Part Of Plant: The Older Leaves

Older leaves are generally affected the most. With some plants, the lower leaves first have the symptoms previously mentioned then the leaves begin to take on a dried or burned appearance.

Thrips multiply much more rapidly at warmer temperatures, so when an infestation occurs, it is best to move the plant to a cooler location until the insects are eliminated.

DDT garden dust is an excellent control for thrips. After a week or ten days, wash it off thoroughly.

If sonic insects are still present, repeat the treatment. If you object to DDT on your plants, use a spray material containing DDT as a dip for ease of application.

Do not use DDT sprays recommended for flies and mosquitoes: Many contain oils that are harmful to plants.

Do not use DDT on kalanchoes or related plants, for it injures them severely.

Scale insects are most troublesome on ferns and foliage plants. They are tiny insects that work under cover of a flattened scale, usually gray, orange, brown, or black.

They feed by inserting their mouth parts into the cells of the leaf or stem and sucking out the plant juices.

The spot directly under one of these insects becomes brown or yellow; eventually, the entire leaf becomes lighter in color.

Fortunately, these insects are stationary except during the first few hours of their existence.

Judicious pruning is helpful where the infestation is localized to a few leaves or stems.’ DDT used as a dip will kill most species of scale though several treatments may be necessary.

If wettable DDT is used, two teaspoons of 50% percent wettable powder in a gallon of warm soapy water are very effective.

Although aphids are the most common of all houseplant insects, they are by far the easiest to control.

Aphids are small, usually green in color, and capable of multiplying rapidly. If left alone. they will do damage.

Usually, they are wingless, but under adverse conditions, such as in late fall, they produce winged stages.

Washing plants regularly or using any good contact insecticide will control them. DDT is not effective against aphids though sonic insecticides containing other ingredients with DDT are effective.

The white fly is related to the mealybug but does not resemble it.

Since it is covered with the same white waxy substance, it is rather difficult to wet with spray materials. The adult white fly is a small, white-winged insect about 1/16” inch long.

The insects in earlier stages, which are wingless and greenish-white, may be found under the leaf along with numerous small black bodies which are actually parasitized young.

A tiny insect parasite punctures and inserts its eggs in the body of the young white fly, which, in turn, becomes blackened and dies.

One of the most practical ways of killing them is washing the plants weekly with soapsuds, which should be washed off with clear water afterward.

Washing plants under a tap will gradually thin out an infestation of white flies, but this takes a lot of persistence.

These washes kill few, if any, adults but will destroy the wingless young and interrupt the life cycle.

A dip made of 1 tablespoon of nicotine sulfate and 1 teaspoon of Dreft to a gallon of warm water will aid greatly in controlling this pest.

The adult flies are not all killed, but younger stages will be controlled. Repeated applications will eliminate all the white flies.

The two-spotted or red spider mite is the most common mite that are troublesome on house plants.

Red spiders are tiny, being smaller than a pinhead when fully grown. Therefore, they thrive in warm, dry situations.

Clearwater as a syringe is one of the most effective control measures.

An infestation of red spider mites in the advanced stages will be well covered with webbing, but even this webbing can be easily syringed.

Syringing the plant with a jet of water helps rid the plant of both eggs and adults.

Cyclamen Mites are also troublesome on some house plants, especially African violets, geranium, and some begonias.

The signs of their presence are usually curled leaves, extreme hairiness on the younger leaves of African violets, and deformed younger leaves and shoots of begonia and geranium.

Cyclamen mites are so tiny and near the color of leaves that they are difficult to see even with a hand lens.

They work, for the most part, inside the terminal buds before they unfold. Therefore, minimal injury at this stage will cause the unfolding leaves and flowers to be deformed.

Before the advent of sodium selenate, there was no practical control for cyclamen mites. Therefore, even sodium selenate, which is watered into the soil in a dilute solution, must be applied carefully to avoid plant injury.

The sodium selenate is taken up by the plant roots and translocated to the tops, poisons the plant sap, and kills the mites or other plant pests.

Sodium selenate is deadly, so it must be handled with extreme care. The house plant dosage safest to use is one gram of pure sodium selenate to 3 gallons of water.

Three waterings at 3 to 4-week intervals will give the plant a gradual buildup of sodium selenate with the least danger of injury.

Number Of Insects Found In The Soil

There are many insects and lower animals to be found in the soil.

These include the following:

Some of these may come to the surface when a plant is watered. But, for the most part, they do not harm plants.

Part of this is eliminated by watering with a DDT solution used for dipping or spraying plants.

Earthworms can best be eliminated by locating and pulling them from the ball of soil when it is moist.

In new potting soil, almost all these pests can be eliminated by baking the soil in an oven from 182° to 200° long enough to cook a large-sized potato.

In baking the soil, it is best to spread it out in pans at depths of one inch or slightly more. During one winter season, the indoor gardener may have to contend with one or all of the pests mentioned.