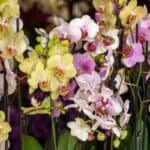 Have you ever dreamed Of the Tales of the Arabian Nights and wished you might journey on that Magic Carpet to far-flung, romantic corners of the earth? It can be done with a greenhouse and orchids—at least in a fancy.

Orchids will bring the exotic beauty and perfume of those faraway lands into your daily life. You do not have to travel to have them, nor go through the technical difficulties of importing them.

Specialists fly them to this country from all parts of the world at a modest cost to you. I have orchids from Hawaii, Siam, Guatemala, Honduras, and even India. They all grow and bloom happily together.

My orchids are in a greenhouse on the roof of an apartment building in Seattle, Washington. It not only corn minds a magnificent view of the Cascade Mountains but provides ample light for my orchids, an essential requirement for growth and flowering.

Because winter is a melancholy time, I especially favor my winter-blooming orchids such as Cattleya Pereivalliana, which often has its lovely rose-colored ruffled-lip flowers with deep maroon in the center at Christmas.

Native to Venezuela, it is famous for corsages because its blooms are smaller than many cattleya species.

This is also true of Cattleya Bowringiana, a fall-blooming species of outstanding beauty with opalescent lavender blooms and a magenta lip. I have a plant that has produced a magnificent winter display of about forty flowers.

Others that bring color and beauty to the home greenhouse when the outdoor world is in the grip of winter are Odontoglossum grande, popularly known as the tiger orchid; the lovely little golden-yellow oncidiums; the white cattleya hybrids and many more. They are joyous beauties to come home to on a stormy winter night.

Other Orchid Types For Winter Display

To increase this winter display, I also grew Cattleya labiata which bloomed for me in May last year and came into its second flowering in late October.

Its flowers are rosy lavender with a magenta lip, and it has a fragrance much like the fragrance of carnations.

Laeliocattleya EVA ROBINSON adds a dash of lavender and magenta tones, and WHITE CHRISTMAS a touch of snowy white.

The tiger orchid, Odontoglossum grande, is spectacular. A native of Guatemala, it has chestnut-brown stripes on the yellow ground in the most unbelievable patterns, plus a cream-colored lip spotted with brown.

In the very center of the flower is a little figure that, according to a friend’s remark, “looks like a little Chinese boy.”

Its vivid color and exotic markings have caused visitors to proclaim it one of the most stunning flowers they have ever beheld. They never dreamed such coloring was possible.

Growing close to my tiger orchid is Oncidium varicosum Rogersi, which repeats a similar pattern and vivid coloration on a smaller scale.

There are about 300 known species, of which O. varicosum is one of the most popular. In her book, Home Orchid Growing, Rebecca Northen describes it as a dancing doll in a beautifully swirling skirt.

I think the dendrobium is one of the fascinating orchids. It presents a dazzling variety of colors and an unusual growth habit.

These epiphytes derive their nourishment chiefly from the atmosphere and grow high in trees in their native lands, the Himalayas through India, Burma to the Malay Archipelago, China, Japan, the Philippines, Australia, and New Zealand.

Dendrobiums are classed as evergreen and deciduous kinds. The latter is among the few orchids that lose their leaves during their dormant season and before flowering.

This peculiarity results from having lived for thousands of years where torrential rain is followed by severe drought.

When we grow them, we must simulate this condition, so when their leaves reach a termination of growth, about the middle of October, withhold water for 2 or 3 months, giving only an occasional sprinkling to prevent the canes from shrinking too much.

Resume watering when the buds begin to swell, and in a short time, the plants will burst into dazzling bloom.

I am growing several deciduous dendrobiums, of which Dendrobiums nobile is probably the most widely known. It has clustered blooms in late winter.

The lip is deep purple bordered with white, and the petals and sepals are white-tipped rosy purple. It is native to India.

Another gorgeous group member is Dendrobiums chrysanthemum, with brilliant orange blossoms from midsummer into fall.

Dendrobium fimbriatum, a native of Nepal, is listed as an evergreen, but mine has shown deciduous habits, and I treat it accordingly.

Its variety oculatum has golden-yellow blooms with a striking and dramatic deep maroon spot in the throat of the lip. It blooms in winter and early spring.

Somewhat similar is Dendrobium moschanon with buff or apricot blossoms that are beautiful beyond words.

I might add that on these types, the leaves grow out horizontally from greenish-yellow canes that look for all the world like bamboo stalks.

Dendrobiums Piero is another popular variety that blooms in February and March with attractive pale pink-lavender sepals and petals with purple striping on the lip. They have a fuzzy look that makes one think of a two-toned pussy willow.

The evergreen dendrobiums come from the Philippines and parts of India and China. They retain their leaves all year round and do not need a drying-off period. They do need warm temperatures and abundant moisture at all times.

Because they are on the unpredictable side, growing dendrobiums is an adventure. They seem to make their own rules rather than follow rigid behavior patterns like most orchids. They will amaze you by doing the unexpected.

Sometimes they will bloom several times in a year. They keep you guessing and are a constant challenge to your interest.

With flowers resembling miniature swans, Cycnoches chlorocarbon, the swan orchid, is beginning to capture the attention of many. Its flowers are often a gold-green or yellow, sometimes brown or red, and have an exquisite grace.

Its native home is Tropical America, which blooms from July to December. The foliage, resembling a palm leaf, is unique among orchids.

I have recently acquired an attractive plant Vanilla Anatolia, the orchid from whose seed vanilla flavoring is derived. A native of Tropical America, it is a vine that grows 40′ feet in its wild state.

Train it on a totem pole indoors as you would a philodendron. It is beautiful even when not in bloom, as the foliage has an attractive succulent appearance. It is just one of the many exciting types that make orchid growing rewarding.

Now that we have glimpsed the dazzling diversity and beauty that the fabulous orchid family can provide, I hope that you agree orchids can bring a bit of the romance of faraway places into your home or greenhouse. Their tropical splendor certainly will brighten winter days.