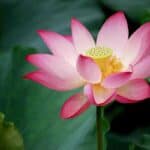 The sacred lotus lily is, I think, the king of all aquatics. Although it has also been called queen, aristocrat, and lord of the pool, I have always preferred to think of it as king because it grows well above all the other waterlilies, as though reaching unto Heaven, proudly surveying its kingdom.

For thousands of years, the lotus has been grown in Indian, China, and Japanese temple gardens. There, as in Egypt, it was long reverenced as a symbol of the soul which, according to ancient tradition, rises out of the mud, reaching up high to bloom in the sunshine from Heaven.

Many old burial crypts, ceremonial instruments, and tapestries are decorated with lotus lily designs. Thus, it has been associated with the soul and things mystical since the early time.

The huge, umbrella-like leaves sometimes measure from 2′ to 2′ 1/2 feet across and are usually held 2′ to 4′ feet above the water, with the blossoms a few inches to a foot above these.

In a natural pond in West Virginia, where the lotus Nelumbium nelumbo Roseum did exceptionally well, I have seen leaves and flowers about 8’ to 10′ feet above the water.

All lotus blossoms are unusually large-front, 10″ to 12″ inches across. The fragrance is intensely sweet, spicy, and haunting. Once you have smelled a lotus, you will never forget its powerful perfume.

The lotus is ideal for the background of an informal pool and the corners or center of a collection of formal styles. It will bring to your garden an exotic touch of the old Orient which no other aquatic can provide.

Lotus must be planted in a large container. The preferred size is about 3′ feet square and 1′ foot deep. In a natural pond, lotus will spread as much as 40′ feet in one season.

For this reason, those planted in a natural pond, or one with soil at the bottom, should be confined or separated from other aquatic plants utilizing partitions. Otherwise, the plants will spread over the pool and crowd additional growth.

Some varieties, such as the Hindu lotus, Nelumbium nelumbo (also Indicum, nuciferum, or speciosum), sometimes called Egyptian lotus, have a root resembling a banana.

In other varieties, such as the American or Chinese red lotus, the tuber may reach 2″ feet or more in length. These tubers are formed late in summer, just before the first frost, enabling the lotus to live over the winter.

In central New York state, lotus starts to grow in early or mid-June. At that time, they send out their runners, which, if not restricted, will run all over the pool.

Once established in a warm, sunny location, most lotus proves hardy and live yearly in any part of the United States. They may be treated in the same way as hardy waterlilies. The best time for planting is from May 1 to the middle of June.

Tubers should be set in rich, clay-type soil, in a horizontal position, 1″ to 2″ inches deep. Be careful not to use rotted manure of any kind near the tubers. Well-rotted cow manure, bonemeal, or blood meal may be mixed through the soil but should not be used close to the tubers.

Some of the waterlily fertilizers now on the market are excellent. Do not use a chemical fertilizer near the lotus.

It is essential to plant the lotus in a warm pool or a warm part of the pool. They will not do well in a cold pool or near a spring. I learned this through several painful experiences.

Although lotus grew and bloomed in the cold pool the first year, they did not make sufficient growth to survive the winter.

Correct water depth is as essential as correct soil depth. The proper water depth for lotus is 4″ to 12″ inches, but they will give their best performance with about 8″ inches of water above the soil level. The planting container may be adjusted to the proper height by placing bricks or blocks under it.

Lotus also makes good tub garden plants. A large tub is filled 1/2 or 2/3 full of soil, water is added above this, and the lotus is set out. Many people will have excellent results with lotus planted this way; tend the tub may be placed on top of the soil or sunk in the ground.

Although lotus generally starts best from tubers, they may also be grown from seeds and runners. To speed the germination of the seed, the shell is filled through, and seeds are planted in soil under water indoors or in the greenhouse.

Runners, or potted plants (really potted runners), are available in the early part of the summer after the tuber has started to grow. However, most nurseries find that the Sacred Lotus lily tubers give the best results and supply these to their customers.