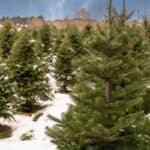 During and even before, millions of evergreen trees are cut to use throughout the Christmas season.

This must be why some people call them “Christmas trees,” whether in active growth on a lawn, in a park, in the nursery fields, or when cut and for sale during the holiday season.

Did you ever wonder when decorating your tree what kind it might be?

Or have they all looked alike, just a tree with sturdy branches covered with green needles and no name other than a Christmas tree?

This year, take a second look.

It could be a spruce (Picea), a true fir (Abies), or a Douglas fir (Pseudotsuga).

Those named are all members of the pine family, which contains the largest group of evergreen, cone-bearing plants.

There is no space to give full descriptions of each.

Perhaps these clues to identification will help, even if they do no more than stirring the interest of someone enough to look more closely at evergreens and note there are differences.

Spruce has bristly needles and sharp-pointed, angled (four-sided), from ⅜” inch to 1 ¼”  inches long, arranged spirally around the twigs.

The flat leaves on the fir may be longer, not so dense, softer, and also arranged spirally but sometimes form a flat spray.

When the spruce sheds its needles, it leaves a roughened surface for each leaf to sit on, a cushion-like growth that remains on the branch.

The bark on the fir is smooth and thin; only a smooth round scar remains when the needles fall.

On the spruces they are pendants. Unlike the true fir, the Douglas-fir has drooping cones like the spruce.

The leaves ¾” to 1 ½” inches long are set spirally around the stem and form a flat spray but are more slender and flexible than those on the true fir.

The winter buds on the latter are covered with resin, but those on the Douglas-fir are not.

“Airy,” “graceful,” “lacy,” and “feathery foliage” are words to describe the hemlock.

The branches, drooping at the tips, are covered with small, flat, rather soft needles and present a softer effect than the firs and spruces.

The needles ¼” to an inch long have two white lines on the lower side. They are arranged in rows on each side of the twig. Cones are usually small.

The red cedar has earned a bad name because the cedar rust disease spreads from this tree to the leaves and fruit of some apple trees.

Young growth is needle-like and prickly as it spreads out from the twigs.

This becomes scale-like and somewhat softer as it ages, clinging close to. the twig and forming what is called whipcord foliage because it resembles a braided cord.

The many slender twigs spread in all directions. The blue fruit is succulent, and the scales are so merged that it has all the appearance of a berry instead of a cone.

Perhaps pine trees are better known than any needled evergreen because, among the many species and varieties, one finds kinds adapted to many parts of the country.

Like so many of this family, the pines have whorled branches.

The needles are rather long (four to as much as 18” inches on some species) in uniform clusters of usually two, three, or five or rarely one or four.

The seeds (some are winged and some are not) are in hard cones, which vary in length from three inches to two feet or more.

If you are near pines (or other evergreen trees), watch for the blossoms on mature trees in the spring.

There will be two kinds on each tree, looking more like cones than flowers.

The staminate cones bear the pollen, which is windblown to the pistillate, which will eventually contain the seeds.

The flower part that holds the pollen is like a scale.

Many of these are arranged spirally on stem-like support. Several of these “cone-flowers” grow in each cluster at the end of a branch.

On other branches are different cones, somewhat smaller, standing erect, one or in pairs.

The scales are arranged spirally but stand out and are apart so that the wind-blown pollen can sift down between the scales.

The cones grow larger as the seeds develop and later thicken and enclose the seeds.

When the cone has ripened, the scales spread apart again and free the seeds.

Unless you live in warmer parts of the country, you will probably not see cedar because it is not as hardy as some of the evergreens used as Christmas trees.

The tree has graceful, drooping branches with hairy twigs and small cones.

The clustered leaves are rigid, as thick as broad, up to 2″ inches long, and dark bluish green.

Does your Christmas tree fit any of these descriptions? If not, you may still have another kind of evergreen not mentioned here.