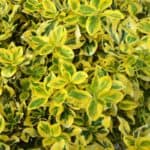 The high color and interest of natural roadside plantings which is well worth driving for miles to enjoy, may be repeated in one’s garden for permanent pleasure by giving proper attention to the selection and use of shrubbery in border and specimen plantings.

For example, the clear, bright red of the winged euonymus, Euonymus alatus, might be used as a keynote of an autumn display of color in the garden. Even as the foliage begins to drop, a new picture is produced when the interestingly-formed winged twigs are revealed.

In addition, they suggest a later performance in the garden picture when they will be covered with the first tracery of winter snow. Its dwarf variety, Euonymus alatus compactus, growing to a height of 5’ feet, adds to its range of possibilities.

Several of the deciduous species of euonymus entertain colorful fruits, which become more conspicuous as the foliage drops after killing frosts occur.

The fruits of the Eastern wahoo, E. atropurpureus, show a surprising pomegranate-purple color not found elsewhere in the garden. Winterberry euonymus, E. bungeanus, holds its generous display of two-toned fruits well into the cold winter months.

The euonymus repertoire in the Fall garden is given further variation by the foliage of one of the evergreen vine forms, purple-leaf winter-creeper, Euonymus fortunei coloratus, which turns to a rich bronzy purple in the Autumn. Any of the euonymus groups may grow in sunny or shady situations.

The Elaeagnus Are Eligible

Out of the singular metallic, wooly gray twigs of cherry Elaeagnus, Elaeagnus multiflora, emerge clusters of silvery pink berries which follow the pink bloom of the early summer. This shrub, of easy culture, adapts itself well to any sunny exposure.

Of particular interest to those who enjoy seed pods or the effect of ripened dried plant parts is the shrub known to many as summer-sweet, Clethra alnifolia, which blooms in the late summer.

Its fragrant white flower spikes are followed by graceful seed heads, which last through the winter.

Drooping leucothoe likewise carries a ripened brown, terminal seed spike and, at the same time, rich, fleshy brown buds for the next season’s bloom. A deep bronze tinges its evergreen foliage, making it a truly year-round classic for the garden.

Another broad-leaved evergreen that is distinctive in its grape-like fruiting habit is the Oregon holly grape, Mahonia aquifolium. Two easily grown varieties of holly also set black fruits, the inkberry, Ilex glabra, and the Japanese holly, I. crenata.

Some of the most choice varieties of shrubs in the summer garden are the following:

In the taller shrub group, suitable for heavy borders:

Some With Red Fruits

There are numerous red-fruiting shrubs in addition to those already mentioned. The Common winterberry, Ilex verticillata is one of the most dependable.

The cotoneasters offer some of the most attractive branching patterns lined with red fruits.

Red Autumn foliage remaining late in the season gives added textural interest to the red fruits of the deciduous barberries.

Japanese barberry, Berberis thunbergii, and its dwarf variety, B. t. minor, have been favorites where compact plantings are required.

Billowing clumps of gray dogwood, Cornus racemosa, with their gray-white berries on red pedicels, are something to which a gardener may well look forward each year.

The old-fashioned snowberry, Symphoricarpos albus, used at intervals in the shrub border or a mass bank planting, is showy at a good distance, and at close range, its effect is as refreshing as the first snowfall.

Another kind of Symphoricarpos, S. chenaultii, is commonly known as pink coralberry, and Indian currant or coralberry.

S. orbiculatus, add still another color to the blend of Autumn colors.  The purple beauty-berry Callicarpa dichotoma may introduce a purple note in a small fine-textured shrub.

Spring Bloom In The Fall

One of the most pleasant experiences in the garden is discovering an occasional blossom on a Spring-flowering shrub. Likewise, any variety of flowering quince may throw an occasional fall bloom.

Double-file viburnum, V. tomentosum, frequently recurs, although the corymbs are usually smaller in the Fall. Mock orange and weigela also favor us in this respect.

Several Shrubs Bloom in the Autumn

The fall-flowering little-leaf lilac, Syringa microphylla, adds a charm to a Fall gardenscape which is equal to, but apart from, the lilac display of Spring.

It has a counterpart in the Autumn higan cherry, Prunus subhirtella autumnalis, with its Autumn show of single light pink blossoms.

Another shrub, the Harlequin glory-bower, Clerodendrum trichotomum, gives an extended blooming period of loose cymes of white flowers marked with a brownish center during September. The fruit is blue with a crimson calyx.

The witch-hazel, Hamamelis virginiana is one of the most picturesque of native shrubs, with its fragrant twisted blossoms in October and November, last year’s seed pods, and yellow Autumn foliage all at the same time.

Some other select shrubs for naturalized effects are:

No clashes occur among Fall’s wealth of color, so wherever the form and texture of shrubs are compatible with the physical setting and the function in the garden picture, they may be combined freely.

So a wise gardener will take full advantage of a good selection for a final display at the close of the gardening season.