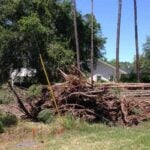 Here in Woodstock, N. Y. can be seen as one more horrible example of the meaningless destruction of scenic beauty by real estate “operators.” Garden clubs, civic groups, and nature-minded people should do something about this senseless, meaningless waste.

In Woodstock’s case, building a new four-lane highway is partly responsible. By the time it is finished, it will push the rural landscape another 50 miles back into the hills.

No such ruin needs ever have been caused.

The Vanishing Of Native Shrubbery And Trees

From the southern Appalachians northward, we possess in our native shrubbery and trees one of the wonders of the earth, an incredible variety of natural wealth.

Flowery in springtime, fruitful in autumn, and even through the snows, it delights and feeds not only man but also innumerable wild birds and animals.

Before our eyes, these riches vanish. With them go the creatures of the wild, which find their habitat radically changed before communities have any idea what is happening.

Only a few towns can muster a group of citizens sufficiently well-informed and aggressive enough to be effective against the omnipotence of speculative real estate. And the pioneering concept of a tree as an obstacle to progress dies hard.

Alert groups could prevent much of this wanton destruction. They could still limit more of it, and in places where removing trees seems unavoidable, they ought to replace them with good substitutes.

Just down the road from me was a somewhat marshy field bordering one of the main motor routes into the mountains. What happened there is all too typical of what occurs when people with no eye for natural beauty move in.

Within the last year, a beautiful and varied native shrubbery that would have provided a natural screen from onrushing traffic has been destroyed.

A partial list of the shrubs thus thoughtlessly cut down includes the following:

At the rear of the property, there was, but is no more, a glorious old stand of black alder.

Through the center of the field, snorted and toiled in midsummer that threatened the countryside’s old peace and beauty and the survival of wildlife, the bulldozer. It left a straight, 4-foot-wide ditch some 3′ feet deep, whose purpose was to drain the field.

A little pond gathered at the edge of the property, where the owner across the wall had proved adamant to the charms of this modern tool of aggression. Indeed, a little pond could be the most attractive thing.

After 8 months, this one is almost completely silted up. Around it spreads a barren waste where no growth returns, and no grass or flower grows.

This is a mountain country, and we expect periodic floods. The flood in midwinter gouged the drainage ditch a foot wider. Each hard rain snakes it a still uglier scar.

If it had been planned for beauty, planted to soil-binding plants, it might have been a delightful little brook instead of an eroding menace.

The ash trees that formerly stood on the opposite edge are almost gone. Only two remain, and one was heedlessly trimmed and left with a gaping, uneared-for wound. You would have thought shade the “developer’s” first consideration.

Close to the village was a large and lovely pasture. Set against a mountain backdrop, this is – or was – an enchanted place of little rolling hills guarded by old pines and ancient white birches. A brook winds through—the brook at least still flows – and sweet fern scents the wind.

Winter used to show a dozen nests of thrush and warbler, swamp and vesper, and field sparrow. With careful husbandry, most of this natural loveliness would remain, even when set with houses. for the contours of the land offer opportunity for pleasant privacy.

Unfortunately, for the survival of our last vestiges of pastoral beauty, the hills are sand. All last summer, huge trucks tore along the road from a small sand pit near the brook.

The sand pit is now an enormous, gaping wound. The top of the bill has been turned into the level, hare earth. And this is a mere beginning.

The “developer” advertises that the desert he has created will be ready in 6 months as “Bonnie Brae!” Much of this unbridled gouging is caused less by a desire to appeal to the lowest taste in landscaping than by a childish delight in destruction, thinly disguised as “cleaning up.”

New York is one of our richest States. It possesses an active conservation department ready to advise. Half a century has elapsed since the Comstocks at Cornell University pioneered nature study.

And Woodstock is a community where such woods as remain are full of reasonably competent naturalists who would not charge for services.

Nobody, of course, ever asks for their advice. No “developer” hereabouts thinks examining the excellent educational material issued by Universities and the State is worthwhile.

In many sections, real estate developments on varied types of land offer admirable examples of planning and landscaping.

Forest and land contours have been carefully used to give privacy, and natural beauty has been conserved. One of the finest examples of town planning is Norris, Tenn.

Norris, in the lovely springtime of the southern palms, is a picturesque town, so bowered in flowering dogwood and redbud that the small houses, irregularly set among their little hills, are barely seen. Each dwells apart on its wooded eminence or in its tiny valley.

When Norris, built by the Tennessee Valley Authority, was sold to private real estate interests, the new owner set out at once to “tidy up.”

He cut down a good deal of dogwood before the roars of an outraged citizenry penetrated his surprised and rather shocked ears. If only we in other towns would act so quickly!

Up this way, despite protection by State conservation laws, there isn’t much flowering dogwood left. True, it looks like the other more shrubby cornels before it is old enough to bloom, but all the kernels are easy to recognize.

Since all are charming in flowers and fruit, a blanket conservation law protecting the whole group might be good.

It is true that the tidiers up, having destroyed the varied riches of the native hemlocks, often set out a few trees.

Down our road, a row of red maples is doing well, but why red maples? of which we have a superabundance when not nearly enough of the magnificent sugar maple exists?

Here is where a garden club or town committee could advise the “developers” or do some improving themselves. The far too rare tulip poplar, the supremely beautiful beech, or the durable and stately hickory would be good choices in this country instead of more red maple.

If the highly developed acquisitive sense of speculative real estate interests could only be turned toward the acquisition of some wild birds and native shrubs along with the property, or if a small fraction of the funds they employ to defeat essential housing legislation might be used in a campaign of self-education, who knows what ten years might bring forth?

Meanwhile, it is up to the garden clubs’ anti-individual nature lovers to prevent wholesale destruction!