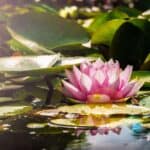 Limited space need not deter you from having a water garden.

Visitors who admire the magnificent display of tropical waterlilies at the Missouri Botanical Garden often express their enthusiasm for these exotic aquatics and wish they could grow them in their back yards.

Anyone can grow and enjoy waterlilies even in a small plot where full sun is available for at least four or five hours each day.

Probably the smallest pool one can wish for is a half-barrel which will hold around ten gallons of water. It is appropriate to set it in some corner of your lot, and it may become a central feature on the lawn.

Effective use can be made of a discarded bathtub or any container that will hold water. This year, one commercial waterlily grower whom I know is offering a fiberglass tank for waterlilies.

Although a half barrel or any other container you choose can be kept above ground, it should be sunk and rimmed with rocks, marble slabs, or even bricks for aesthetic reasons. If, however, you intend to keep fish with the waterlilies, it is advisable to leave at least two inches of the rim exposed.

Otherwise, heavy rain will cause flooding, and the fish will be swept out on the lawn. When rocks are not desired, creeping plants may be used to soften or cover the barrel’s rim. Any carpeting stonecrops, like Sedum acre, or the creeping Phlox subulata, will soon hide the barrel’s edge.

A wooden half-barrel will last for a considerable time. However, if a more permanent pool is wanted, make it out of concrete, using the half barrel for the form.

Because of the pool’s diminutive size, only dwarf or pygmy waterlilies may be grown. One of the best is Nymphaea tetragona, ‘known as White Pygmy. This waterlily is reliably hardy and will winter outdoors. We have grown the Nymphaea tetragona in a small tub such as described above and later in a concrete pool for many years.

Despite the fact that the water turns into ice several inches thick during the coldest days of each winter, this waterlily has never frozen. The flowers are about the size of a half-dollar and continue blooming for several months, beginning in spring.

We propagate White Pygmy from seedlings developed in the outdoor pool. So far, attempts to reproduce the lily from seed in the greenhouse tanks have failed. Freezing weather is required to stratify the seeds.

Nymphaea tragona does not seem to produce new tubers for division etas in other waterlilies. Thus seedlings are the only method of increase for stock.

There is a yellow-flowered pygmy waterlily, Nymphaea tetragona helvola, and a pink form Joanne Pring developed in our greenhouse tanks. The yellow hybrid and its natural mutant can be classed semi-hardy and must be taken indoors during winter. Both propagate readily from tubers.

A small pool, such as the half barrel, limits the grower to one plant. When more species are desired, building a large enough collection to hold several varieties will be worthwhile. Even at that, the pool need not be as large as those seen in botanical gardens and city parks, especially when one plans to stick to the dwarf kinds.

Though one can build a simple pool by digging a suitable hole in the ground and puddling it with clay to make it watertight, a more substantial concrete construction pool is advisable.

It can be built in any shape or size to suit the individual pocketbook. But thought must be given as to whether plants are to be grown in tubs or planted in soil at the bottom of the pool. The walls of a concrete pool should be about five inches thick and reinforced, especially at the corners, for security.

Suppose the gardener does not understand the fundamentals of concrete construction. In that case, it is advisable and profitable to get an experienced person to do the job or consult him on how to go about it.

The depth of the pool needs is only 2′ feet. Yet water should extend at least 8″ to 12″ inches above the waterlily crowns. Boxes prepared for the plants are desirable because the pool can be kept neater, and there is less danger of weeds getting started.

For dwarf plants, 10″ inch pans or pots can be used. These can be elevated on bricks to meet water level requirements stated above, but boxes about a foot square will be found ideal.

Since waterlilies are heavy feeders, the soil must be richly fertilized. Good topsoil mixed with well-rotted cow manure will give the best results. Commercial waterlily growers sell good fertilizer, which can be substituted for cow manure.

We have been using a 10-8-6 formula in our pools during the past few years and find it efficient. Before placing the box or boxes in the pool, spread a half-inch of clean sand on top of the soil to keep it from making the water cloudy.

The other pest that may appear is the hydrocampa, a kind of leaf-cutting worm which can become a nuisance. This little white worm cuts two small pieces from the leaf edges and fastens itself between them by a web.

Completely hidden, it floats on the surface in its raft and feeds on the leaves. Often parts of leaves can be observed floating around in the pool. If one separates the two parts, the worm will be exposed. It is best to squash the worm.

Sometimes leaves of night-blooming varieties appear to be rotting. If one looks on the undersides of the leaves, small threadlike worms will be noticed wiggling around. They can be troublesome, but the only treatment advice is to sprinkle tobacco dust in the water if there are no fish.

There are numerous varieties of tropical waterlilies from which to choose. Although some kinds require considerable room for full development, all can be grown as dwarfs when confined to tight quarters. We have them blooming profusely in small pots in some of our tanks, but only small flowers can be expected under these conditions.

From the two score hybrids developed at the Garden, a few lend themselves favorably to small pools. One of the best is Director George T. Moore, produced in 1941. It is considered a small-sized day bloomer with small, dark green leaves and compact deep rich purple flowers borne in profusion. The golden centers enhance the purple of the petals.

Often eight to 12 flowers appear at one time. This plant usually develops community heads and makes a delightful picture. Smaller flowers in greater profusion are the result. It is a good propagator.

Nymphaea colorata, an extant species from Africa, introduced in 1938, has been used for hybridizing and is one of the parents of Director Moore. It is even smaller than the latter in all its parts, and the leaves do not spread widely. Instead, they remain compact and ring the clusters of flowers in a neat pattern.

Midnight, the first semi-double variety, also bears Nymphaea colorata blood and is probably the darkest rich purple of all the water- HELLE lilies. It also has a habit of forming community heads.

Bagdad is an exciting novelty, especially for its richly-patterned, medium-sized leaves, which are light green and marked with reddish-brown splotches above.

Nymphaea sulphurea is an excellent yellow, pygmy-type, tropical waterlily used extensively at the Garden in hybridization work. St. Louis Gold and Aviator Pring are new introductions developed through this medium.

Even though the flowers of Mrs. George H. Pring are large (to 13″ inches across), the plant is suitable for a small pool, and the whole plant will remain small when grown in a small container.

Perhaps even better for the purpose is Isabelle Pring, similar to the preceding variety. Yet the flowers are more compact, and the leaves have a tendency to be viviparous, which means the habit of producing young plants.

In recent years, we have also introduced a dwarf pygmy lotus type from the Belgian Congo, which can be likened to a miniature Missouri. The leaves are relatively small, and the floral envelope often curves sharply downward, almost parallel to the flower stalk, while the stamens stay erect.

If the grower wishes to try other waterlines not listed in this article, secure some of the well-illustrated catalogs from reliable concerns. Your eyes will be opened to the many wonderful aquatics that will grow in your small pool.