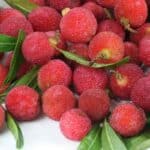 Although never spectacular, they are decorative both in summer and winter when their twiggy bushes are covered with small, aromatic, bright gray berries that last half the year.

Bayberry leaves are alternate and somewhat crowded toward the tip of the shoots. Though variable in outline and size, they are more or less elliptic and dotted with minute yellowish resin particles.

Inconspicuous flowers, which appear in small catkins in early spring, become berries, green at first and later encrusted with a waxy secretion that adds a gray color.

Since Colonial times, the fragrant oil of these berries has been utilized in many ways, chiefly in making bayberry candles.

Despite bayberries’ charming winter fruit and willingness to grow in poor soil, they are seldom seen in home gardens. Fortunately, landscape architects appreciate their agreeable qualities and have used their mass in parks and along highways.

Several nurseries keep stock on hand to supply this demand, and dense, bushy plants are available at moderate prices.

It is the general practice at most nurseries to cut plants collected from wild stands down to the ground and make them develop new tops. These, produced by older roots, are best for garden plantings.

To be sure, one can do this since bayberry flourishes in many coastal states. But, plants collected thus do very poorly as a rule and regain their feet, as it were, only after 2 or 3 years.

This only applies to smaller plants which, if less than 2’ feet high, can be moved easily with no such setback in most cases. But larger clumps must be root-pruned and give a good account of themselves only after 2 or 3 years.

Bayberries have fibrous and compact root systems, which become very dense as plants mature. Therefore, they should permanently be transplanted with as much soil on the roots as possible, and specimens of any size should be bailed and burlapped.

Early spring, just as buds are breaking, is the most favorable time for transplanting. However, suitable results may be achieved in other seasons with proper precautions.

The sketch on page 31 shows three clumps of bayberries used in a planting combination around the corner of a house and the walk to the front door. The accent plant at the comer is a dense, upright, or conical yew, such as Hicks or Hatfield Yew (Taxus media varieties hicksii and Hatfield).

Behind it and slightly around the corner, an Ozark Witchhazel (Hamamelis vernalis) makes an informal spreading shrub. This is rather thickly branched and has a great abundance of spicy-fragrant yellow or reddish flowers in midwinter or later.

The first choice for the low border planting is Sheep’s-ear or Wooly Betony (Stachys lanata), an evergreen perennial with a dense cushion of spectacularly silvery leaves about 6” inches high.

Wooly spikes of small purplish flowers rise a foot or so above the leaves but do not compare in effectiveness with the foliage.

This low foil of silver around the dark rich green of the yew and the grayish mass of bayberries is a fascinating study in contrasts. Perhaps too intriguing, as inspired friends and neighbors will soon copy it.

In heavy or wet soil, however, Sheep’s-ear will not do, and something else must be used. Substitutes might be Periwinkle (Vinca minor), hardy candytuft (Iberis sempervirens), or a fine-leaved form of English Ivy.

This low planting is preferable to be entirely of one type rather than a selection of several. Once established, it will significantly simplify maintenance and tie the grouping together.

For best results, this planting combination should have an abundance of sunlight. Bayberries grow in the shade but develop into thick, bushy specimens only in open situations.

Here it is essential to have them dense and compact, not only for the beautiful framework of branches but also to have the berries near the level of the windowsill of the house in full sight.

Bayberry shrubs vary significantly in height, depending on the environment. As garden subjects, they are best kept at 4’ to 5’ feet.

California Bayberry and the Southern Waxmyrtle tend to become taller, but with a little more attention to pruning, they can also be used, as shown in the illustration.

Ordinarily, none of the Myricas is afflicted with insect or disease trouble. They are sturdy and adaptable native plants of the highest caliber.

One hesitates to go into the different kinds of bayberries, at least in the eastern states, and to particularize on scientific names because long-accepted names have been subjected to sweeping changes in recent years.

Myrica californica, the tall and often tree-like shrub with waxy purplish berries, native from California to Washington, is not under this shadow of confusion, nor is the similarly lofty and narrow-leaved Wax-myrtle (Myrica cerifera) which grows wild from Cape May in New Jersey to Florida and Texas.

The most familiar of the group is Myrica caroliniensis. In many books and catalogs, this is represented as the Northern Bayberry.

This is adequate for all practical purposes, and the plants can be purchased confidently. It must be admitted, however, that this name is proven to be a synonym of Myrica cerifera and should be given up as the scientific name of the northern species.

The broader leaved bayberries are now set forth as two distinct species:

With branchlets of both kinds in front of one, it is possible to follow the botanical distinctions without much trouble. A brief tabulation will sum them up:

Except for the more or less evergreen character of M. heterophylla, the specific differences are of minor importance from a horticultural point of view.

Evergreen Bayberry stands below zero weather without damage, and Northern Bayberry is even harder, as its natural range extends from North Carolina to Newfoundland and inland as far as Ohio.

It is interesting to note that the authority for the scientific name of the latter species, the French botanist Loiseleur-Deslongchamps, was a meticulous scholar, and in latinizing the word to mean “of Pennsylvania,” he removed an “n” to comply with the classical rules against a double letter.