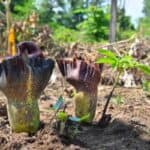 Near the head of the list of the world’s strangest plants is one from India that is almost unknown in this country.

It is the Bell-flowered Amorphophallus or Elephant Yam, Amorphophallus campanulatus. However, it is not a true yam but a tropical relative of the common calla lily.

While the plant is too tender to be grown outdoors in the North, it is adapted to southern Florida, where it has flourished for many years at the United States Plant Introduction Garden near Miami.

First Evidence Of The Plant’s Activity

The first evidence of the plant’s activity in the spring is the pushing above ground of a greatly swollen bud.

It opens into a fluted, bell-shaped, deep maroon flower a foot high and half again as broad from the center of which rises a coarsely wrinkled maroon cone, like the clapper of a bell.

From the base of this cone, small orange-red fruits later develop. As soon as the flower opens, it gives off a very offensive odor, but this vanishes the second day, and the peculiar bloom may then be viewed close at hand.

The single leaf usually does not appear until the flower has withered. Then its stout stalk grows to a height of 5’ or 6’ feet and supports the great rounded blade, often 8’ feet across, which is cut into many small leaf-like divisions.

Late in autumn, the leaf goes to the ground, and the bulb that produced it, and the flower lies dormant beneath the surface until the next spring.

The flat, rounded bulb grows to great size, weighing as much as 50 pounds, and lives for many years.

A few side bulbs are produced on it; from these and the seeds, new plants can be developed.

In the Orient, this plant has some commercial importance for food, especially among the poorer classes.

The huge tuber is used like potatoes and as a source of starch. When they first appear above ground, the young leaves are eaten as cooked greens.

In this country, the plant’s only value is that of a striking curiosity. So it certainly is that, under its amazing habit of growth, great size, and offensive odor, that attracts carrion insects.