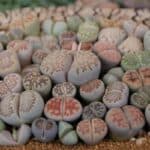 Protective coloration and mimicry of surrounding objects so everyday in the animal kingdom are seldom encountered in plants.

Few realize that a group of plants that best exemplify this interesting phenomenon are easy subjects for the sunny window garden.

These plants belong to the mesembryanthemum family, represented in some of our gardens by the old-fashioned ice plant. More familiarly and briefly, they are called “mesembs.”

The mimicry species of the group are mainly confined to the stony deserts of southwestern Africa, where several years may pass without rain and where the temperature may vary from nearly freezing to over 100° degrees Fahrenheit. in a single day.

They have been cultivated extensively in Europe, particularly in England and Germany. Still, there appear to be only a few good collections in this country and even fewer sources of supply.

Amazingly, the mimicry plants resemble the pebbles and rock chips among which they grow. The stone faces (lithops), of which several score species have been described, are small, cone-shaped plants consisting of a pair of more or less flat-topped leaves between which the solitary white or yellow flower appears in autumn.

According to the species, the leaves vary from creamy white through soft shades of gray, brown, violet, and olive to brick red. Usually, several shades of color are present in a single plant in intricate tracery and mottling.

Ten or a dozen plants of most species can be readily accommodated in a 4”- 5” inch pot and pebbles can be placed among those selected to match their color and pattern.

Once a year, the plant produces a new pair of leaves between and at right angles to the old ones, while the latter begins to fade and slough off.

Dinteranthus, lapidary, and Pleiospilos (“split rocks”) bear several pairs of leaves simultaneously. These look as if they had been carved from stone and closely resemble the rock chips off the plant’s native habitat.

Dinteranthus and lapidary may have white leaves subtly tinted with pink and rose shades, which blend amazingly with limestone chips, while the gray of Pleiospilos is a perfect match for bits of granite.

In addition to their apparent mimicry, some mesembs are “windowed” plants. The upper surface of the leaf is provided with a transparent window or numerous tiny panes, which admit light that filters down to the chlorophyll-bearing tissue deep within the leaf.

Many lithops are windowed, but perhaps the most striking examples are found in the lucent panes at the leaf tops of opthalmophyllum and fenestraria.

Most of the species are not difficult to raise either from seed or plants purchased from a specialist. Although growth from seed to maturity may take several years, the plants are interesting at all stages of their development.

A temperature of 70° to 80° degrees Fahrenheit. is necessary for seed germination. Still, a generous closet is as effective as a greenhouse as long as the growing medium is kept moist by water supplied below. Under these conditions, germination of most species is rapid and may occur in a week or less.

As soon as the seeds have germinated, they should be placed in the light; glass panes covering the pots during the germination period should be removed, and the moisture may be reduced somewhat.

Continued warmth will promote relatively rapid growth, but cool temperatures are not otherwise detrimental unless the plant is kept too wet.

Once the seedling stage passes, the keys to good growth are light, free air circulation, and careful watering. The fact that these plants may survive for a year in their native haunts without rain should not be applied literally to their cultivation.

Occasional watering on sunny days from March to June with a nearly dry rest until late August may be followed by light to moderate waterings from fall until winter. Then water should be reduced again if dull days and low temperatures prevail. This schedule works well for most of the more common mimicry plants mentioned.

The best general rule is to water lightly when the plant is making new growth or flowering and water only every week or two when it appears to be resting.

The chief dangers of over-watering are the favoring of rot and the production of abnormal growth with suppression of flowering.

Various formulas for soil mixtures have been recommended for these plants, and all are characterized by a high percentage of coarse, sharp sand to ensure rapid drainage. A simple combination consists of two parts of sand to one part each of leaf mold and loam.

A little hydrated lime may be added to reduce acidity, and a small amount of powdered or finely granular charcoal is beneficial if available.