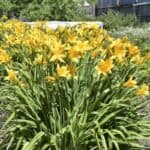 Thirty years ago, when my garden began, the first perennial planted was a clump of Lemon Lilies, Hemerocallis flava, taken from my grandmother’s childhood home.

Some, planted near a pool, delighted me with their fragrance and light lemon color so effective with the various iris, Oriental poppies, lavender, and purple Hesperis or Sweet Rocket.

My one regret was that daylilies did not bloom all summer. Then, I came upon an article in the Ladies Home Journal and was pleased to learn of new varieties with different colors and periods of bloom.

A little later, I found an advertisement in a classified column of a leading garden magazine and, after some deliberation, placed an order. It was the best investment I ever made. It started me down a path that has led me to broader horizons.

For one reason or another, my garden developed voids or empty spots. A mass planting of Madonna lilies and Hybrid delphiniums had failed; beds of hybrid tea roses had become another cherished memory; a pool had sprung leaks and been discontinued.

In seeking to fill these and other voids left by the passing of the riotous bloom of spring, I wanted to get something enduring and not too demanding of time and energy as the years advanced. By the end of my first year with daylilies, I felt sure I had found the very plant I needed.

One of the most appealing traits of daylilies is their ease of culture. I found that they would grow and bloom in the shade if it were not too dense nor too near tree roots but that they do better in the sun part of the day and enjoy a place in full sun.

They do not insist on a particular type of soil but will reward one richly for plenty of moisture and nourishment, especially during the blooming period. Those dark red colors have a richer tone when grown in slightly acid soil and will hold their color better if given afternoon shade.

There is a suitable variety for every garden condition, and it is a test of the excellent gardener to find it. Daylilies are planted near pools and ponds where their yellow stars are reflected in water, but they do not want their feet in the water like Japanese iris.

One of the most arresting sights I have ever seen was a commercial planting light blue Japanese iris and yellow hemerocallis in alternate rows. I toyed with the idea of planting such a combination but gave it up for mine is a limestone country, and my garden is too sharply drained for that type of iris.

Daylilies fit a greater variety of conditions than any other perennial, and no perennial has fewer insect or disease enemies.

With this flower, there are no weekly dusting and spraying programs; no root rot or borer to take the joy out of life; no blackspot, mildew, aphids, or red spider to combat.

While there is a thrips now known to affect a few varieties, the trouble is as yet rare and easily controlled with Malathion or Neem oil as an insecticide.

Daylilies are hardy and, once planted, may remain in the same place for many years. As long as they continue to bloom well, there is no need to divide and reset them.

They do not need to be dug and stored each fall to be replanted each spring, and neither do they have to be staked.

Newer ones do not have the itching feet of the old roadside lily, and one need has little fear that they will usurp too much space.

Hemerocallis have two general types of foliage, evergreen and deciduous. The evergreen type is preferred in southern gardens since it furnishes a sexy mound of green foliage throughout the year.

In northern gardens, the evergreen foliage disappears after brutal, freezing weather and reappears with the warmth of spring days.

In snowbound sections, such plants are usually hardy, but along the border of hardiness, where there’s alternate freezing and thawing, there may be occasional losses. In these sections, the deciduous type is to be preferred.

Southern breeders of daylilies confine themselves almost wholly to the evergreen type, while northern breeders work primarily with the deciduous. However, some produce both kinds for the flowers of one type are as good as the other, and some outstanding ones have been created by crossing the two.

Daylilies are amazingly versatile. There are tall ones for the back of the border to keep company with hollyhocks, delphiniums, and foxgloves. There are dwarfs for the front of the wall, rock garden, and almost any in-between height imaginable.

There are sizes of flowers to suit every taste, from 2″ inch imps to 8″ inch monsters. There is a wide variety in the form and shape of flowers, some broad and flaring, some trumpet-shaped, others with recurved petals or a spidery effect.

Whereas the older daylilies were yellow or fulvous toned, now there are many different colors and combinations of color.

In many, there is a diversity of patterns. Some have solid colors, called selves; others may have a deepening of the paint just above the throat varying from light yellow to orange or greenish yellow.

Bicolor is fascinating, with sepals in some shade of yellow and petals red, light pink, or deep maroon. The fact is that there are all colors of the rainbow to choose from except white and blue, and these may be available soon, for there are now some very light yellows and pale lavenders.

The variety in the season of bloom is wide. Some begin to bloom along with tulips, and others come along as these are finished so that there can be a continuous parade of flowers during the whole season.

Daylilies are warm-weather flowers, yet they can give the garden color and drama for six months longer than even the iris in this section of Indiana.

Except for the earliest, most varieties bloom for a month and others for six weeks. Newer ones are setting records of up to 138 days of continuous bloom, and some breeders have developed a line of everbloomers.

Such varieties produce new stalks at intervals all season. Among the older ones, several have this everblooming tendency, and it is from them that the new everbloomers are being developed.

The time of opening and closing varies widely in hemerocallis. Some may open with the first streak of dawn and still be open when the sun has gone to rest. These characteristics are noted in the daylily catalogs.

Others open in the late afternoon and become the queens of the evening garden. Some are so accommodating that they can be arranged in the daytime and still be suitable for the evening.

Since there is such a wide variety of color, height, form, and season of bloom, a daylily can be found for any need that arises, and one or another combines well with all types of perennials.

Possibilities for lovely garden pictures are limitless if one keeps in mind basic color rules. Pale yellow varieties fit in with anything and should be the ones to start with.

Orange tones should be used carefully and at some distance from any but the lightest pink.

White phlox are lovely with the various red daylily tones. Since all “hems” have some yellow in their flowers, they combine well with one another, except the orange and the pinkish-toned varieties.