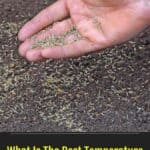 There are two camps regarding grass in the realm of plantophiles (plant lovers).

The first camp believes that all grasses outside the purely ornamental varieties are weeds and detract from potential garden space.

The other camp believes that lawns provide a sense of beauty and uniformity that can frame shrubs and flowering plants rather than take away from them.

However, growing grass can often feel just as complicated as any flower, and many aspects can stump even experienced lawn enthusiasts.

One of these pitfalls is determining the right temperature for germinating grass seed.

What Is The Best Temperature For Grass Seed Germination?

It’s thus important to know which type of grass you’re growing and how to determine soil temperatures.

Cool-season and warm-season grasses are almost total opposites in many respects.

Warm-season grass must be seeded in the spring and will be most active during the summer months.

They’re most active and germinate most efficiently at ground temperatures between 65° and 70° degrees Fahrenheit.

Meanwhile, cool-season seeds should be sown in the fall and will usually fall dormant during the summer months.

They can germinate and grow in a ground temperature range of 50 to 65° degrees Fahrenheit.

As these two grass types are active at different temperatures, it’s important to know which type you have to determine when to overseed so those seeds will germinate efficiently.

Bermuda grass is very popular in the south and southwestern states due to its tolerance to drought.

St. Augustine is another popular warm-season grass, but it doesn’t grow well from seed and instead spreads primarily through runners.

It’s not drought-tolerant, and lawns are usually started using sod, with overseeding reserved for thickening a healthy lawn.

Zoysia rests somewhere in the middle, with a tolerance for drought and light shade.

One of the most popular cool-season grasses is Kentucky bluegrass, which takes up to 3 weeks to germinate.

Perennial ryegrass can germinate in as little as 7 days and is often grown as a companion to Kentucky bluegrass.

Meanwhile, tall fescue is often overseeded on warm-season lawns and can remain green all winter in the warmer zones.

Fescue is cool season grass suitable for lawns in the cold, northern regions of the US or as an overseeded seasonal grass in warmer regions.

Once the temperature drops below freezing, grasses will go dormant, and seeds won’t germinate until the weather warms.

You should not overseed cool-weather grasses in any soil temperature below 50° degrees Fahrenheit, as they won’t germinate if it’s colder than this.

On the opposite end of the scale, grass will go dormant if the temperature gets too high, which means your seeds will fail to germinate.

With warm-season grasses, the highest possible air temperature for germination is 90° degrees Fahrenheit.

After this point, the seedlings will become stressed.

Cool-season grasses begin to get lethargic when air temperatures hit 75° degrees Fahrenheit and seeds won’t sprout above this.

The terms “air temperature” and “soil temperature” have come up frequently, and the difference between the two is essential to understanding when you can overseed.

The air temperature applies to the hot or cold you’ll feel when outside. It can be measured with a thermometer or other temperature-reading device.

When discussing most plants, the temperatures given will be air temperature.

The ground is an amazing insulator, to the point aboriginal peoples use wattle and daub.

In fact, homes built into the side of a hill will have a constant temperature without the need for furnaces or air conditioners.

Grass grows right up at the surface, so it’s not so well insulated, but the ground temperature still plays a role.

As grass seed is generally just below surface level, the ground temperature plays an implant role when the seeds can germinate.

There’s a reason both air and ground temperatures have been discussed here.

While it’s possible to shove a thermometer into the ground, this will only tell you the ground temperature at that moment in time.

To germinate seeds efficiently, you’ll need to know the ground temperature for slow-germinating species over a week or more.

That’s where air temperature comes in.

The air temperature tends to be around 10° to 20° degrees Fahrenheit warmer than the soil temperature is above freezing.

Thus, to estimate the ground temperature on a given day, check the forecast to see the estimated afternoon temperature.

Warm-season grasses can germinate at around 70° to 90° degrees Fahrenheit air temperatures.

This equates to 65° to 70° degrees Fahrenheit in ground temperature.

Ground temperature can be a little cooler if you deal with lots of runoff or melting snow.

Generally, you should wait at least 2 weeks after the last frost to sow warm-season grass and at least 90 days before the predicted first frost of fall.

Cool-season grasses should be planted at least 45 days before the first predicted frost.

Even if temperatures are ideal for sowing, timing with these guidelines will allow the grass to better establish itself before cold weather sets in.