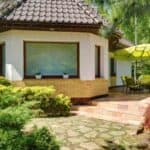 This pleasant place is peaceful and well-ordered in an unusually well-assembled plant material setting. Planned and planted by the Randalls, this garden was designed for minimum upkeep.

The owners wanted a place that would contribute in every way to their pleasure, though they did not care to be “slaves” to their project.

The garden today has no flower beds because of the care they require, and there is very little lawn to mow.

Paving and edgings of a brick cut down the upkeep substantially, and the plant material used grows like Topsy.

A green garden has many assets and is an excellent solution to the problem of planting in partial shade.

Full-grown deciduous trees give background to this garden, and evergreens provide the all-year-round effect.

Evergreen In A Garden

Evergreens are always welcome, but especially so in a garden that is closely connected to the house.

In summer, when the deciduous trees are in leaf, various textures, forms, heights, and colors, together with the contrasting shades of the evergreens, add character to the planting.

Play Of Light And Shadows

Also, the play of light and shadows cast by the trees creates an intriguing picture. In winter, the bare branches of the deciduous trees etched against the sky have their own charm.

Furthermore, the house’s location makes it possible to enjoy the garden from the living room, dining room, and bedroom windows.

Different levels always add to the interest in a garden. The two levels introduced by the Randalls were made by taking advantage of the foundations of the old house, which lay demolished at the time of building.

This garden is a concrete example of the advisability of putting any walls or foundations already present on a property to use.

Instead of removing these, the Randalls filled the old basement, leaving about 1’ foot of its walls above ground for a garden enclosure.

Thus, the sunken garden effect was developed. In this way, expensive construction was obtained at a low cost.

The fireplace and its hearth, which were in the former house, were kept intact. These make a dominant feature.

Early and late in the season, when the evenings are cool, this wood-burning fireplace gives comforting warmth and cheer.

It is also equipped with a charcoal burning grate so that meals can be cooked with little effort.

The owners built a wood bin with four courses of cinder blocks laid over a 2-foot foundation of crushed stone.

Covered with a slab of slate, the bin makes a convenient shelf for plants or pans, and dishes when cooking or serving meals in the garden.

The picnic table consists of a slab of wood that rests on horses; a small slab is used for family dinners, and a larger one for buffet suppers.

Adjoining the fireplace section, an unusual green garden pattern has been designed using pachysandra instead of flowers.

This requires no upkeep and is attractive in all seasons. An ordinary garden hose used to outline the beds helped make it easy to visualize the desired curves.

The lines were then made permanent with brick curbing. As a result, this little garden has for its central feature a millstone.

The center of the millstone is filled with soil where a Christmas rose (Helleborus niger) flourishes.

A border of English ivy softens the base of the millstone. The coloring of the old bricks used for the flooring gives a mellow note.

These were laid over an inch of sand. Here and there, moss has taken hold in the crevices and gives a softening touch.

Another part of the green garden extends at angles to the pachysandra garden. Here, the beds which border the brick walk are filled with thriving periwinkle (Nina minor).

A garden seat forms a focal point at one end of the walk, and a homemade pool provides a feature at the opposite end.

The illuminated evening garden is particularly glamorous and adds immensely to the pleasure of lingering outdoors well into the night.

The ship lanterns on the fireplace and the concealed lights in the trees give a special lure to the closing hours of the day. Seven lights are artfully hidden in the trees to avoid glare.

Three outside outlets have been installed, and yards of rubber-covered wiring make it simple to shift the lights around.

On the upper terrace, a honey locust has been headed high to make a comfortable place for breakfast and lunch. It gives a light, feathery shade like a “big fern.”

A wall fountain nearby breaks the line of the retaining wall. The sound of water is always refreshing and adds another delightful note.

Near the fountain, maidenhair ferns are planted in pockets in the stone wall. They are kept moist and green with the water that drips from the shelf under the fountain into the basin below.

Flowers In The Background

Flowers of white phlox in the background are conspicuous in the evening light. Chrysanthemums follow these for fall color.

The treatment of the front of the place is distinctive and adds a great deal of atmosphere.

Originally the ground sloped up abruptly to the public road. Finally, the grade was cut and held in place with retaining walls, and the resulting space was turned into a charming court.

Marigolds and petunias planted above and below the wall give a colorful approach to the house.

Christmas and Lenten roses have also been worked into the planting scheme for winter bloom.

The house itself is unusually appealing. Potted vines, supported in iron brackets, fall gracefully from the second-floor balcony.

Again potted plants prove their value, and those that will grow in the partial shade, together with boxwood and English ivy, accent each side of the front door.

On the garage wall, Laland firethorn (Pyracantha coccinea lalandi) has been espaliered, and the plants are heavily laden with bright orange-red berries in the autumn, which last all winter and continue to be ornamental.