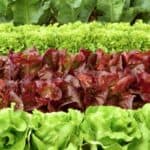 Gardeners have been raising and eating lettuce for at least 2,500 years.

Even though the particular varieties served at the tables of Persian kings around 500 B.C. may not be offered in current catalogs, there are plenty of delectable kinds from which we may choose.

In two catalogs from which I ordered vegetable seeds last year, 24 different lettuces were described, not counting one recommended for the particular enjoyment of chickens and rabbits.

Of those suggested for human consumption, I raised the following eight:

The best and earliest of these was ‘Bibb.’ There is no tastier lettuce than this prime favorite of connoisseurs.

Unfortunately, it does not grow well in hot weather. Therefore it must be sown as early in the spring as the ground can be worked.

Frosts will not harm it. Naturally, it produces the best results in the rich, sandy, friable soil that all kinds of lettuce prefer.

Before seedlings grow an inch high, thin them to stand about 2” inches apart. A week or 2 weeks later, thin them again to 4” inches between plants.

When the remaining rosettes have grown big enough almost to touch one another, pull every other one and discover how good lettuce can taste.

The plants now left, standing 8” inches apart, will have enough space to develop to full size before the weather becomes too hot for them.

Sow ‘Bibb’ again in mid-August, covering the seeds with a quarter-inch of soil, watering thoroughly, and then covering the row with strips of paper to keep the moisture in the ground until the seedlings appear.

With luck, you’ll get a nice fall crop. Early spring sowings of lettuce should be lightly covered with fine soil, then pressed down gently with a board.

12 to 15 seeds per foot of a row are all needed. But the seeds are so tiny that it is hard not to sow them thicker, and two or three times as many do not harm if the seedlings are thinned promptly.

Use “staples” made from wire coat hangers to prevent strips from blowing away.

Although I have raised ‘Bibb’ without difficulty for several springs and almost as many falls annually, I let myself be alarmed by reports that it is a difficult variety to grow.

So last spring, as usual, I sowed `Matchless’ lettuce simultaneously to ensure an early crop.  ‘Matchless’ is almost invariably described as similar to ‘Bibb’ but easier to raise.

It tolerates warmer weather and does not tend to seed so quickly in a hot spell. If you have difficulty with ‘Bibb, ‘ settle for ‘Matchless.’

This year I’ll keep enough faith in ‘Bibb’ to forego the insurance crop of ‘Matchless.’

I want to use the space to try another variety, ‘Mignonette,’ which is highly recommended for delicacy.

For the second spring crop, following ‘Bibb’ and `Matchless’ last year, I sowed ‘Great Lakes 659,’ as splendid head lettuce of the crisp iceberg type as you can find.

Plants of this variety should be thinned to stand 12” inches apart because the heads are really big.

But don’t think of ‘Great Lakes,’ or any other variety, to the ultimate distance between plants all at once.

Play Safe With Slugs and Cutworms

Occasionally slugs and cutworms take a toll on tender young plants. Play safe by first thinning the plant to 2” inches apart, then a week or 2 weeks later to 4” inches, and so on.

Later thinnings can be used in salads, while the tiny early ones may be transplanted into any vacant spot in the garden.

The transplants will mature a few days later than plants left to grow where they started. So never let lettuce become crowded.

While ‘Bibb’ and ‘Matchless’ require a little less than 2 months from seed to maturity, ‘Great Lakes 659’ takes almost 3 to bring its big, solid heads to perfection.

Therefore it should be sown as early as ‘Bibb’ and ‘Matchless’ to provide a continuous supply of lettuce for your table.

Cos Or Romaine Lettuce

Cos or romaine lettuce, which forms tall, narrow heads larger at the top than at the ground, may be sown 3 weeks later because it tolerates more heat.

It is slower to go to seed than any other kind of head lettuce except, perhaps, ‘Big Boston’ and ‘White Boston.’ Cos is another gourmet lettuce.

Its outer leaves are dark green, while those at the heart blanch nearly white. Sweet lettuce, like ‘Bibb,’ is prized for its crispness.

The plants should be thinned to stand 8” to 10” inches apart. ‘Parris Island’ and ‘Dark Green,’ remarkably similar, are the preferred strains.

Now we come to the loose-leaf type of lettuce which grows well and tastes good in hot weather.

Beginning as early in the season as you wish, figuring about 7 weeks or a little less from sowing to eating, plant succession crops 3 weeks apart.

If you cannot irrigate them during dry spells, ensure that the ground where they are planted contains abundant humus and mulch them.

‘Salad Bowl’ is a deservedly popular loose-leaf variety but not, in my estimation, quite the best.

I shall drop it this year in favor of a colorful pair: `Slobolt’ and ‘Ruby.’ Slobole is similar to ‘Salad Bowl,’ equally bright green in color but with leaf edges so frilly.

The whole plant looks soft and dainty as a powder puff—if you can imagine anyone using green powder!)

(Maybe the ladies on Mars do.) I don’t know if Slobole tastes any better than ‘Salad Bowl,’ but it looks prettier.

`Ruby’ lettuce is dark, slightly bronzy red, and somewhat bolder than the dainty ‘Slobolt’ although its leaf margins are gracefully fluted.

Its flavor is a bit sharper, although by no means bitter. The two combined form a dish that will gladden the eye and tempt the palate of even the most hardened salad hater.

They create such an attractive picture of growing together in the garden that one almost hates to harvest them.

I am toying with the idea of using these two varieties to edge a bed of young shrubs this summer.

‘Sweetheart’ is a new lettuce of the luscious butter-head or Boston type, which can usually be grown successfully during summer.

I like to sow it early in July for late September and early October eating; it requires ten to 11 weeks to mature.

Mulch it if you cannot water it regularly during hot, dry spells.

Space In The Garden

Lettuce takes up little space in the garden. 3’ or 4’ feet of row of each kind at planting will yield enough for a family of 3 to 5 people. If you have more than one, the rows need not be more than 16” inches apart.

If you do not have a vegetable garden, you can raise lettuce in a flower border without detracting from its beauty.

If you live in an apartment, you can produce lettuce in a window box.

Schedule For Sowing Varieties of Lettuce

Here is a suggested schedule for sowing several varieties of lettuce to supply at least one kind, and often more, for eating from late May until early November.

These dates fall on Saturdays this year, making the schedule convenient for weekend gardeners.

They are based on the latitude of northern Ohio. Therefore, depending on your local climate, they may need to adjust a week or two earlier or later.