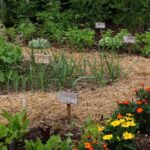 A vegetable garden may not have the same glamour and appeal as a flower border. Still, one that is well-planned produces dividends in the way of quality and flavor that are practically unobtainable even in the best food markets.

It has been stated many times that there is no substitute for homegrown corn, peas, and other vegetables. Several readers shared their gardening experiences.

At first, our 12 x 14 ft. vegetable garden, dug into the upper right-hand corner of our 15,200 square foot lot, was the laughing stock of our families and neighbors. Yet the yield was significant.

We ate seven dozen large ears of corn from four rows, although four short rows of black wax beans produced only four pounds because the season was cold and wet.

Eighteen tomato plants produced enough fruit for every meal from late July to the end of September. Six of a neighbor’s cast-off broccoli plants yielded over twenty-four large servings, and there were plenty of radishes and lettuce and one plant of chives for salads.

Our carrots were very squatty because of our heavy clay soil, but we had 35 vines crawling on a fence.

Each fall, we spade in compost, lime, and our unique mixture of 5-10-10 dried manure and granite. More “special mixture” is spaded into the soil in the spring. At least twice during the growing season, dried dung is applied to the plants.

During dry spells, the ground is thoroughly soaked every other day. A mulch of grass clippings placed around the corn and tomatoes helps conserve moisture and keep weeds at a minimum growth.

Last year, at the suggestion of a friend, we decided to grow peas in solid patches instead of in rows. This meant no weeding, cultivation, or removal of the brush. We also found that birds did not bother the peas as much and nibbled only around the edge of the patches.

Since we grow peas for table use only, we like a succession of small plots. Here is the way we handle it. A strip about 7’ feet wide and 40’ feet long is set aside.

Beginning about the last week in March (near Philadelphia), a 7-foot strip section is spaded and planted.

The seeds are dropped about 3” inches apart in drills, 6” to 8” inches. This is repeated for the next 6 weekends, so we have peas continuously for about 6 weeks.

In harvesting, we find it is better to pick two or three times to get the peas at their best. This year I kept a yield record.

We put stakes in place at planting time to mark spots for planting squash at a later date. As the peas were harvested, the vines took over and gave us—a succession crop.

My garden was planned to fit a wife’s and mother’s limited time. When the ground was ready early in the spring, the first step was to mark off the garden with stakes and string, saving these to make straight rows at planting time.

After the seeds and seedlings were planted, only mulching remained. I used pine needles, which are plentiful nearby, and mulched the green beans, onions, corn, squash, and tomatoes heavily. This eliminated most weeding and watering.

During the summer, I watered the garden only after a long dry spell and pulled those weeds that defied the mulch, laying the weeds on top to add to the mulch.

No vegetable has proved as satisfactory for us as peas. From six double 25-foot rows, we pick enough for a family of four, plus enough for freezing. Then when the last row is harvested, a succession crop is planted, thus doubling the use of the soil. In a small garden, this is a valuable asset.

Our garden is forked over in the fall, with a top dressing of rotted manure. No additional fertilizer is used. As early as spring, as the soil can be worked, the rough clods are raked smooth, and the pea rows are marked.

Furrows are made 2” inches deep and 2 ½’ feet apart, and the peas are planted an inch apart in the rows.

We grow only the low varieties but use three-foot chicken wire with substantial stakes at six-foot intervals for support. We get twice the yield by planting a double row 6” inches apart, with the wire in the center.

In July, the tops are dumped on the compost pile, the rows reduced, fertilized, and sown with a succession planting of snap beans, carrots, beets, broccoli, or midget corn.