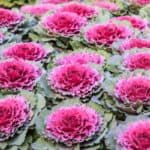 Few plain dirt gardeners can visualize kale, the richest vitamin of the pot herbs, as a foliage plant for the flower border. Japanese horticulturists came up with ornamental kales more colorful than coleus.

In Japan, ornamental kales are so highly valued that they take the place of summer bedding plants in the Emperor’s garden during winter.

A Tulsan, Capt. Hal Matheny, the airline pilot, saw kales in the Emperor’s garden and was so impressed that he traveled miles of the beaten tourist path to obtain seeds.

Imagine Matheny’s surprise when the “winter petunias,” so-called by his Japanese guide, produced plants identified in his Tulsa garden as decorative kales.

Decorative kale, kin to the wild cabbage of Europe, has gray flat outer leaves surrounding finely cut and curled hearts of flower form and great beauty. The kale can be had in rose, red, purple, lavender, yellow, and white varieties.

Long raised in England, the ornamental kales bring color to winter flower borders and are considered excellent for flower arrangement.

The dean of flower arrangers, author Constance Spry, says that the hearts of kale have the drama and quality of a Chinese drawing.

Both ornamental and vegetable kales are cold-weather plants and require the same culture.

In the upper south, zone 6, to have the most favorable temperatures of 40° to 65° degrees Fahrenheit, it would be necessary to plant kale seeds outdoors during early March.

If September’s usual drouth and heat abate, then seed may be sown during September to provide two months of growing weather before the average first frost of November 7.

In the Chicago area, success in increasing kale has been reported from July seed sowing. Your county agent can tell you the best dates for seed sowing in your locality.

When planted during early spring in the upper south, the ornamental kales show their characteristic heart coloring by May.

However, color is intensified by frost, and during December, January and February, they are at their best in mild winter climates.

Kales do not seem to care whether soils are acidic or alkaline. Sandy loam is the preferred soil, and an early dressing of nitrate soda is said to get them off to a good start.

Filling seed furrows two inches deep with vermiculite is good moisture insurance, as the kale seedbed should never be allowed to dry out.

Seed, if sown during early spring in excellent soil, can be planted 3/8″ inch deep, but the 1/2″ inch depth is preferred during fall.

Always scatter sand over the seed furrows to keep vermiculite from washing away, or peg an old mesh window curtain down over the seed bed.

Kales grown where summers get hot should have protection from the afternoon sun or be transplanted to the north side of a foundation planting.

Space seeds far enough apart so that thinning will not disturb plants. Mature plants must grow 18″ to 24″ inches apart.

While kale seems immune to the worst cabbage diseases, aphids and worms must be controlled. Chlordane worked around the plants after all seeds had germinated, giving reasonable control of soil pests.

Is decorative kale edible? This writer does not know but will settle for the premise that most gardeners are so in love with beauty that they do not want to consume it.