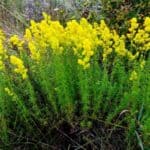 One of the plants closely associated with the Christmas story, and particularly with the manger in Bethlehem, is our lady’s bedstraw, a plant found rather commonly in the wild and with increasing frequency in our gardens.

Popular belief and legend ascribe many pleasing associations to the Blessed Virgin and wildflowers.

These are reflected in such names as the following:

According To Christian Tradition

According to early Christian tradition, our lady’s bedstraw, Galium Rerum, grew abundantly as one of the “flowers of the field” in Palestine, and mingled with straw and bracken, was mowed down and used as cattle-bedding in the stable in Bethlehem.

It was on this rather harsh yet fragrant bed that the Christ child lay. It is said that upon His birth, the withered hay burst into fresh bloom, the flowers of the bedstraw changing from white to gold.

The painter Nicholas Poussin (1594 to 1605) is said to have painted a Nativity showing the bedstraw receiving its gilding from the celestial rays streaming from the Holy Child.

During the Middle Ages, gentlewomen used the bedstraw as mattress-stuffing and for pillows, for the plants upon drying become fragrant and springy. This is why the name is sometimes written, ladies’ bedstraw.

However, some writers think that the name bedstraw is a modification of the word bedstraw, or our lady’s bedstraw because the plants were early used by peasants in saying their ayes and paternosters telling their beads, the stems with their regularly spaced whorls of leaves supplying a substitute for a rosary.

The flowers and tips of the bedstraw have long been used instead of rennet to curdle milk in the making of cheese – certainly a more aesthetic source of coagulant than the lining of a cow’s stomach!

From the flowers also, and from the leaves, a yellow juice is expressed, used in coloring the famous Cheshire cheeses.

Gerarde, the great herbalist writing in the 16th century, quotes an even earlier writer as saying: “. . . the herb thereof is used for Rennet to make cheese.”

He says further that people “do use it to turn their milk, that the cheese which they make of sheep and goat’s milk might be sweeter and more pleasant in taste and also more wholesome.

The people in Cheshire especially about Nantwich, where the best Cheese is made, do use it in their Rennet, esteeming greatly of that Cheese above others made without it.”

That some of the women of the sixteenth century were, even as today, concerned about their figures, may be inferred from Gerarde, when he says: “Women do usually make pottage of Cleuers (bedstraw) with a little mutton and oatmeal, to cause blankness, and keep them from fatness.”

Medicinally bedstraw was valued, for it “Stancheth the blood; boy let in oyl is good to annoynt a weary traveler; inwardly in provoketh lust,” says another writer, Culpepper, who in his “British Herbal” also further states that: “The decoction of the herb and flower is good to bathe the feet of travelers and lacquies, whose long-running causeth weariness and stiffness in their sinews and joints.”

And for centuries it was known that a refreshing acidulated Summer drink could be made by distilling the flowers or steeping them in water.

From the roots, a yellow extract is obtained, and used in the tinting of hair. This, mixed with alum, yields a red or red-orange pigment, particularly prized in the Hebrides for dyeing tweeds.

There is a legend in these islands that the will-o-the-wisp, or ignis fatuus, is the unhappy and restless spirit of a woman who selfishly gathered more of the plant than was her due and who was, in punishment, condemned to wander perpetually in search of still more.

Many are the common or vernacular names for our lady’s bedstraw, indicative of its popularity.

The most common name for it in the Middle Ages was Stæ. Mariæ Stramen (St. Mary’s bedstraw).

Its present botanical name, Galium serum, means milk true; milk from its property of curdling, and true because it is traditionally the very plant that filled the Holy Manger in Bethlehem.

From June through September its massed blossoms often form bright yellow patches and carpets in dry fields and along the borders of roadsides.

Naturalized from Europe, it is now becoming very much at home in America, and is extending its range; already it is very common here and there, locally.

It grows to a height of 2′ to 3′ feet, but usually, the weak and slender stems recline on the ground, or each other, forming tangled bushy clumps.

Some American seedsmen, who specialize in the unusual, are now offering seeds of our lady’s bedstraw under the name Golden Babysbreath.

The lovely golden sprays are a beautiful addition to any garden, and are also usable as cut flowers.