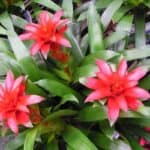 Bromeliads are as ultramodern in appearance as the United Nations buildings in New York, but they have been popular houseplants for a hundred years in Europe.

The bromeliads are air plants, with such fascinating names as Aechmea, Vriesia, Billbergia, Tillandsia, Neoregelia, Cryptanthus and Guzmania. Their forms and flowers are as spectacular as their names.

The pineapple is one of this family and so is Spanish moss. Most of the plants are of the same general pattern as the top of a pineapple—a rosette of leaves in a graceful whorl—but the variety of colors, designs, and markings is like a fantasy.

Trying to describe a bromeliad to someone who has never seen one is almost impossible, and, fortunately, we have pictures to supplement our words. But until you have seen the colors for yourself, you cannot fully appreciate them.

Bromeliads have been called “foolproof” houseplants. They are not infallible, but probably come as close to it as any. The major problem in growing house plants is judging the watering correctly. Bromeliads are shaped like vases and hold water in the cups, and you can see at a glance if they are dry.

Further, they are as tough as cacti and have a unique texture. The strong leaves may be highly polished, and even the new leaves are as thrilling as the mature foliage. In the tropics, ants, frogs, lizards, and snakes live in the cups. In cultivation, the water should be kept fresh.

Bromeliads are grown primarily for their brightly colored and beautifully designed foliage, but the flowers that come are likewise unusual and enhance the assets of the plants. Generally running to very bright colors, they do not look like the ordinary run of flowers at all.

The flower spikes rise from the center of the cups of water and turn the plants into living vases of prize-winning arrangements. In some varieties, the flower clusters are down inside the cup and do not come higher than the foliage.

The bracts are more conspicuous than the blossoms. Achmea fascists have a flower spike like a pink torch, with a crown of Alice-blue flowers. Vriesia Marie is called “Painted Feather” because of its flat spike of bright red and yellow bracts, which hold their color for almost six months.

The color range in the blossoms runs from the bright shades of shocking pink, electric blue, brilliant orange, royal purple, and Kelly green to the more subdued tones of pastel pink, lime green, and sky blue—all in various bizarre combinations that defy all rules of color harmony.

Bromeliad blossoms look like something out of a modernistic dream. Few plants offer anything to equal them in design or color.

Another outstanding feature is that most of the mature plants (except a few giant species) are the right size for decorative use indoors. They prefer small pots which do not take up much room, yet the plants command attention.

Only in recent years have the bromeliads come into favor in this country. Several varieties are inexpensive and easy to obtain, and it can be expected that bromeliads will become more and more popular as their fame spreads. There are several growers now who have more than 100 varieties in cultivation.

The interest in bromeliads in the United States can be traced directly to one of the most famous present-day plant explorers, Mulford Foster. He has discovered more kinds than anybody before him and has also hybridized and produced more new varieties than any other grower.

The stories of his collecting trips in South America are hair-raising adventure tales, and his work with bromeliads has earned him a place in the horticultural hall of fame.

Most of the bromeliads prefer filtered flight in any window, but many can be grown in locations with less light. Since they are air plants, growing mostly high on tree branches, they welcome fresh air. In summer, they will benefit from a vacation outdoors under the trees.

They are unexcelled for use on screened porches, sun porches, patios, and terraces and withstand extremes of temperatures, though not freezing.

Bromeliads may be used singly or in groups. Attractive dish garden arrangements may be made by planting several varieties in one container, blending harmonious colors and sizes.

Such a group in bright tones can be made by using Aechmea miniata discolor, with its highly polished leaves that are wine-red on the undersides, “Painted Fingernail” (Neoregelia spectabilis), with its rich green leaves tipped with red, and low-growing, salmon-rose Cryptanthus bivittatus at the base.

Spectacular in itself, when the plant flowers, there will be vibrant tones of red, yellow, and white. A green combination may be made of Vriesia Marie, Cryptanthus lacerdae, and Aechmea orlandiana for accent, with leaves boldly marked with mahogany.

A variety of ferns and succulents can be grown in containers with bromeliads as fillers or you can use a bromeliad in an arrangement with some of the more common dish garden subjects as a color highlight. Some of the red-centered kinds are excellent in boxes with dracenas, marantas, cissus, ficus, and other green plants.

The best potting medium for vrieseas, tillandsias, and guzmanias is straight osmunda fiber, used for orchids. Almost all bromeliads, however, can be grown in a very porous mixture of equal parts peat moss, perlite, and sharp sand, with a teaspoon of cow or sheep manure (when growing outdoors) added to each 4-inch pot.

There should be plenty of broken crocks and charcoal in the bottom of the pot, which should be as small as possible, only large enough to balance the heavy plant.

Since bromeliads are air plants, their roots must not be smothered. Keep water in the cups at all times, and dampen the compost when filling the cups. Set the plants out in the rain to catch their rainwater unless the weather is cold.

The bromeliads you grow are practically immune to pests. If you find some scale, remove it with soap and water, and a soft brush. Sonic of these plants are highly sensitive to oils and minerals, so the soapsuds treatment is safer than using a chemical. Be certain to rinse the soap out of the cups.

Propagation is by offsets, which come out from the base of the original plant after it flowers. When roots appear on the offsets, they may be cut off of the mother plant and potted individually. If the new plants are not removed, they will develop more rapidly and probably bloom in the first year.

If cut off, as is desirable in the varieties in which the mother plant dies soon after flowering, they bloom the second year. Occasionally, the bottom leaves on a plant will turn brown and may be removed for the sake of appearance. There is no cause for alarm unless the center is rotting.

Once a bromeliad has bloomed, it will not bloom again, but, of course, the new plants will. Feed it, while growing, with any good liquid fertilizer applied at the roots, but one feeding a month during the growing period is sufficient.

Among the easily obtainable kinds are the aechmeas, which come in an unbelievable color range and an assortment of sizes. They have long-lasting flowers and fruit. Aechmea orlandiana has hold, mahogany, and modernistic markings against a pale green background.

The brilliant orange spike with white flowers appears in midwinter. A. fasciata is an urn-shaped plant of green, with frosty white stripes. The pink bracts of the summer flower spike release French blue flowers, which last for about three months.

A. miniata discolor is a graceful spreading plant, green on top, and wine-red on the undersides. The bright orange bails on the spike are tipped with bright blue stars—a dazzling combination.

Billbergia nutans was one of the best-known bromeliads in the 1950s. Its tall green tubes grow in clusters and in time produce a large colony of plants. The flower spike rises from the tube and hangs gracefully over the top.

The shocking pink bracts release small green and purple bell-shaped flowers, with rolled-back edges and a great amount of charm. B. nutans will survive considerable neglect and stand the considerable cold.

Another species, B. pyramidalis has olive green leaves, red bracts, and purple flowers, while B. amoena Viridis is a tall, stately vase of maroon, frosted with white spots. Bright green flowers have delicate pink bracts.

Neoregelias are called “Painted Fingernail” plants because of the bright red tips on the leaves. They are handsome, heavy-textured plants, with marbled markings. Neoregelia spectabilis and N. marmorata and their hybrids are the most familiar. The flower spikes do not rise above the tops of the cups.

Vrieseas are spectacular. Vriesea carinata hybrid Marie, the “Painted Feather,” is a delicate, lime-green plant, with brilliant green and red feather-shaped flower spikes that stays fresh for about six months and is the dream of all indoor gardeners. V. splendens, the “Flaming Sword,” is just as spectacular as it sounds.

The handsome plant of black and green stripes is highly decorative when not in bloom, but the “flaming sword” itself is unbelievable. It is a brilliant, flattened, flame-orange spike, pointed at the top and rising a good 15 inches out of the cup.

After about two months of this display, small yellow flowers appear in the arils of the scale-like covering. They last only briefly, but the spectacular spike persists for several weeks longer. In this variety, the sucker is formed as the mother plant withers, so there is no increase in the number of offsets. Propagation is by seed only, and six to seven years are required for the first flowering.

If you have ever looked straight down on the top of a palm tree from an airplane, you know what Dyckia fosteriana looks like. It is a rosette plant, very small and slow-growing, of green dusted with powdered sugar and edged with white spines. Dyckias are very hardy and even grow in snow.

Cryptanthus look like starfish plants and grow low and flat. The flowers do not count, but the foliage is fascinating. Cryptanthus zonatus is reddish brown striped with gray and looks for all the world Like snakeskin. C. lacerdae (“silver star”) is greenish-silver, C. bivittatus is salmon pink and C. beackeri has light yellow on a lime-green background.

The Spanish moss of the South is Tillandsia usneoides. T. ionantha is a spectacular miniature bromeliad, two to three inches tall at the most, pinkish gray, shaped like a long, narrow pine cone, with purple-blue flowers.