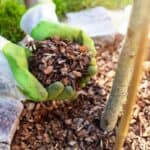 In Northern climates, the fall gardening chore that takes top priority over the others is protecting the plants which might not survive the winter.

This can be done by applying a mulch or protective layer of peat moss or some other material in and around the plants.

Whether or not a plant should be protected depends upon the severity of the winter in your area, the nature of the weather (alternate freezes and thaws cause the most damage), and the inherent quality of the plant.

If some “hardy” plants in your garden have proven themselves susceptible to winter damage, these should be mulched.

Also, many perennials, bedding plants, and summer bulbs should be protected.

Some of the mulching materials that you can use are:

When To Apply Winter Mulch?

Generally, a winter mulch shouldn’t be applied until the ground is well frozen and the plants are dormant.

However, it should be applied to newly transplanted trees immediately after transplanting to keep the soil warm and prevent any rapid temperature change, thus providing conditions that are most favorable for root growth.

Strawberry beds should be mulched before the temperature drops below 20° degrees Fahrenheit but after the plants have been exposed to several hard touches of frost.

A mulch can also be applied in late spring and early summer. Then it serves several purposes: it admits water and air to the soil but excludes light.

It checks the velocity of driving rain, thus permitting the water to drop gently into the soil.

It shades the soil, preventing baking, and not only keeps the soil in better condition to receive rain but also makes it more favorable for root development.

It acts as a blanket, preventing evaporation from the soil surface and by shutting out the light, it discourages the growth of weeds.

By the time you read this article, you will be able to buy a new mulching product, ground black walnut shells, that is superior in many ways to commonly-used materials such as peat moss, ground corn cobs, or salt (marsh) hay.

Such is the report of Dr. Luther Baumgartner, Director of the Baumlanda Horticultural Research Laboratory at Croton Falls, New York.

In testing the medium-fine grade of walnut shells, he found that when used as a mulch, the material does the following:

The material will be marketed under the trade name.

O-G-M is the abbreviation for organic granule mulch.

Dr. Baumgartner also found that a coarser grade of ground walnut shells made an excellent surface for garden paths.

A heavily-traveled garden path covered with this material was still in good condition after three months’ use.

During this period, it was subjected to three torrential spots of rain; it resisted erosion, stood up well under traffic, washed clean after each rain, and remained neat.

When I read Dr. Baumgartner’s report, I wondered if he had had any evidence that the walnut shells contained a material toxic to plants, but there was nothing in the report to suggest this.

It is well known, however, that the roots of black walnut trees produce a substance known as juglone that is decidedly toxic to rhododendrons and tomatoes.

Because they do not rot readily, they will last much longer than such materials as peat moss, sawdust, and straw and consequently need not be replaced as frequently.

The crops mulched with walnut shells show no signs of nitrogen deficiency, so no extra nitrogen has to be supplied to the soil.

Rapidly decaying mulches such as sawdust, straw, and corncobs may cause a temporary nitrogen deficiency in the soil because the nitrogen already exists there and is used by soil bacteria during the decay process.

In such cases, additional nitrogen in the form of sulfate of ammonia, ammonium nitrate, urea, or even nitrogen in a complete fertilizer must be supplied to compensate for this loss.

Some mulching materials like peat moss and ground corn cobs may be washed away by heavy rain, especially when dry.

However, ground walnut shells appear unusually resistant to washing away with heavy rain.

Materials such as peat moss and ground corn cobs will absorb the lightest rainfall and then release this moisture into the air by evaporation.

In such cases, little if any of this water reaches the soil and thus cannot be used by the plant.

On the other hand, ground walnut shells do not absorb any moisture, and even a light rainfall will pass through them and into the soil.

Other mulching materials which swell up when moistened will tend to thatch or shingle and thus prevent rains from reaching the soil.

This mulch also tends to remain wet for long periods, a condition highly detrimental to the crowns of perennial plants.

The uniformity of the walnut shell particles and their cinnamon-brown color makes them even more attractive than the older materials.

Unlike many older mulching materials, which make ideal nesting places for rodents, the product, O-G-M, is treated with a non-toxic material that repels these pests.

O-G-M appears to be an excellent mulching material for another very important reason.

It is not as great a fire hazard as excelsior, salt or marsh hay, peat moss, and straw, particularly when these materials are dry.

Apparently, ground walnut shells can resist a burning match or a lighted cigarette far better than the other materials.