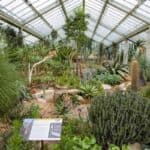 But for a lot of us, they have a special charm due partly to the endlessly varied queerness which makes them the eccentrics of the vegetable world.

Even more important is the startling improbability of their brilliant, extravagant, and tropically lush blossoms.

One day they may look stolid, unenterprising, and even discouraged. The next, huge flowers in yellows, purples, reds and snowy whites have spread open their filmy petals.

The miracle of flowering is never more dramatic. Even those who live among them just can’t quite believe it.

If you happen to be among the growing number who find them fascinating, there is no other place.

You can see so many of our native species in such a natural setting as at the Arizona-Sonora Desert Museum in the beautiful, unspoiled Tucson Mountains a few miles west of the center of Tucson, Arizona.

It is in the center of one of the finest giant cactus forests.

Now “museum” is a misleading word. It usually suggests somber indoor halls, dried or stuffed specimens, and a general air of deadness.

At this museum, everything is alive, and nearly everything is out of doors in the brilliant Arizona sunshine. To call it a “zoo” or even a “garden” is almost as misleading.

But at this museum, zoo, garden, or whatever, the animals and plants are all native to either Arizona or the adjoining Mexican province of Sonora.

The plants grow in such natural arrangements that none seem to be planted.

Those which grow wild in that particular area were left where nature put them, and those from other parts of Arizona and Sonora have been so artfully naturalized that you wouldn’t know which had been moved.

No wonder the Desert Museum, though only 5 years old, is now one of the principal attractions for tourists in the Southwest, visited by some 150,000 people annually.

And it is so spacious that they don’t crowd it either. The living collection of the Arizona-Sonora area’s birds, animals, and reptiles is almost complete.

So is that of the flowering cacti and shrubs with a good collection of other herbaceous plants thrown in.

And since it is a non-profit educational institution, everything is done to introduce the visitor as pleasantly as possible to the identity and the habits.

The meaning and the relationship of flora and fauna make up the natural community of those who have learned that the desert can be a good place to live if you know how.

The visitor who wanders along the pleasantly meandering paths will find everything labeledónot only with a name but also with interesting information.

While the children are inspecting the prairie dog village or getting a purr from the friendly Mexican jaguar in return for a kind word.

It is the one behind bars only because he plays a little too roughly; plant-loving parents can, if they like, seek further information at various special exhibits.

At the Saguaro Ramada (gift of the Desert Garden Club of Tucson), they will see growing seedlings of the night-blooming cereus.

“Giant cacti” (saguaros) are only a few years old and only a few inches high, as well as lifelike models of the cacti, which do not happen to be blooming at the moment.

Still under construction but nearing completion, the most ambitious of the special exhibits is a huge underground tunnel with glass panels to allow inspection of the subterranean life of both the root systems of desert plants.

The burrows of living nocturnal animals sleep out the day there but have access to above-ground enclosures for their nightlife.

Cacti don’t all bloom at the same time, but of the hundred or more native species, the greatest number is probably in blossom during May.

It also happens to be an enjoyable time to visit the Southwest), though quite a few, including the wide spectacular varieties of the large barrel cactus, choose July and August.

Which is the most striking or the most beautiful? Opinions vary.

To it is the saguaro, sometimes 50′ feet tall, weighing several tons, and bearing the end of its arms a cluster of white flowers followed by the blood-red “pears.”

It is the white-winged doves who love to cat and are still gathered by the Indians of the region who make a kind of marmalade out of them.

To others, nothing is so charming as the little 2” or 3” inches high fellows tuck themselves away under a bush and bloom so exuberantly that the plant itself is almost hidden.

To still others, it is the native species of night-blooming cereus, the most drought-enduring of the night bloomers.

This is never more than two or three dry-looking sticks from a huge underground tuber until one night it expands its incredible 3” or 4” inches white flowers, which last for that one night only.

The vague popular notion notwithstanding, every desert plant is not a cactus – not even if it is prickly.

In May or June, the palo verde tree is covered with yellow blossoms, and the ocotillo (or coach-whip plant) bears brilliant red torches at the ends of its spiny stems, sometimes when not a leaf is present.

But perhaps the greatest of the freaks is the boojum tree which is native only to Mexico near the Gulf of Lower California but thrives at the museum. Attempts to describe it usually break down.

It looks like a substantial woody carrot with its roots in the air; it may grow 20′ or 30′ feet tall or maybe only 5 or 6, and twigs stick out every which way from the carrot-like trunk giving it a decidedly “mimsy” appearance.

The name is said to have been given by an early government forester who knew his Lewis Carroll and exclaimed when he first saw it, “There ain’t no such plant. It’s a boojum.” And the name was too appropriate not to stick.

The Museum was established by its first director. William H. Carr, with a grant from the Charles Lathrop Pack Foundation.

It has since grown by leaps and bounds thanks to further grants from the Pack Foundation and substantial gifts from many Tucson citizens.

The maintenance expense is met by memberships and an admission fee of 50 cents for adults and 25 for children over six. It may be reached in half an hour from downtown Tucson.