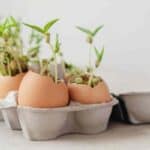 Doesn’t it make you mad to find that flat of special seedlings damping off? You spent a lot of time planting the seeds and waiting for germination, you watered them, you babied them and there they are, half of them down with damping off disease.

Nothing to do but to douse ’em with fungicide and hope for the best. It’s no comfort to remember that you forgot to sterilize the soil. Or maybe you did and the pesky fungus slipped in. Anyway, you’ve got trouble.

We have had damping off trouble too, but no more! For us, it’s pretty much a thing of the past. We no longer use soil to grow those special things we especially want. We can’t afford to!

Despite the grower’s best efforts, once in a while, he will have trouble with damping off. No matter how careful he is, it happens if he grows his seedlings in soil.

Our rather extensive breeding programs at the North Platte Experiment Station use a sterile soilless medium for germinating seeds. After spending a summer hybridizing, we don’t want those very special seedlings to die from fungus.

If they die, it means a year lost in the breeding program, and we may have lost that one seedling that would have been a valuable new variety.

Perhaps you are not a hybridizer, and the seed you plant is just ordinary, but still, you want your seedlings to grow into good plants.

You count on them to fill a flower bed or a row in the vegetable garden.

In our estimation, even the best soil is second-rate material for growing seedlings. We never use it for those special lots of seeds, but only for such toughies as tomato and cabbage.

For the special seeds, we use a sterile medium and feed the seedlings with a nutrient solution.

Our hybrid chrysanthemum, penstemon, petunia, and rose seeds are never planted in soil, yet we are growing the best seedlings, cuttings, and plants we have ever grown. We have almost eliminated seedling loss.

Probably many Flower & Garden readers now use the soilless method of growing seedlings but I am sure a lot of you do not.

It is to those who do not know that this article is directed. If you try the method outlined below, we are sure your plant losses will take a nosedive.

Several years ago, the U. S. Department of Agriculture published a little booklet advocating the use of sphagnum moss as a medium for germinating seed. This was good!

Sphagnum seems to have some substance that inhibits the damping off of fungus and other organisms that kill seedlings.

Get the seed to sprout, and you will have your plants with no fuss or worry. The rate of growth could be controlled at your discretion.

Give them a “full feed,” and they grow like mad; cut down on the number of nutrients and slow up.

If feeding is stopped, they just sit and wait for the next feeding. In one trial, a flat of fibrous-rooted begonia seedlings waited in perfect growing condition from January until the following fall.

Best of all, they were not excessively hardened but remained in excellent condition to resume growth as soon as feeding was resumed.

Perhaps this seems a little unusual to the uninitiated, but the grower who has tried knows that many plants can be grown in a sterile medium and can be held at any size by merely withholding the nutrient solution.

If they are overgrown, they can be stopped without injury, yet identical seedlings in the soil would become too hardened and so stunted as to be worthless.

Sphagnum had much to recommend, but it also had one serious fault. The rootlets of seedlings formed such a sod that it was impossible to remove them without serious root injury. A medium that would not become soddy was needed.

Vermiculite partially met this need, but it, too, had a fault. With repeated wetting and drying, it tended to “slake down” and become waterlogged.

Before the seedlings were ready for the garden, the volume of vermiculite might have been reduced to one-half of its original volume and have lost the granular texture so important for good growth. Something was still lacking!

A new product made of lava rock expanded by heat and called perlite appeared on the market. This was stable; it did not slack, it was easily shaken from the rootlets of the seedlings, and it had everything except that it did not produce good seedlings in many cases.

Grown in pure perlite, seedlings tended to be chlorotic, growth was slow, and seedlings lacked substance.

After a trial period, a combination of the three, sphagnum, perlite, and vermiculite, was found to be an excellent medium for germinating seed and starting cuttings.

Used at the rate of one part sphagnum and two parts each of perlite and vermiculite, it was a medium that would not become “soddy,” would not slake down, and would shake from seedlings with minimum root injury.

This mixture has proved excellent for starting seeds of all kinds, from the dust-like seeds of begonia and African violet to the big seeds of nasturtium.

Sphagnum increases the stability of the mixture and is necessary for the very fine-seeded species but may be omitted when larger seeds are sown.

For plants that produce big, husky seedlings, disturbance of the surface of the medium during watering is not serious, but to the tiny seedlings of begonia and violet, it may be fatal.

Where To Obtain Sphagnum

Sphagnum can be obtained from almost any nursery firm and garden center. Before grinding, it should be hand sorted to remove tree leaves, grass, or other organic matter that might serve as focal points for fungus infection.

The dry sphagnum is rubbed through a $4-inch mesh screen to grind it. Ground sphagnum can be purchased, but the cost is greater, and you will save money by preparing your own.

Making sure that it is well-packed in the corners and along the edges. After the flat has been filled and watered, plant the seed.

You can either sow, broadcast, or plant in rows. Don’t use too much seed.

Crowded seedlings cannot develop into husky plants, and you will have to thin them. In the sterile mixture, seedling losses are far less than in soil.

If the seed germinates, seedlings will not be reduced in number by disease.

Seeds can be planted somewhat deeper than in soil, for this medium offers little resistance to emerging seedlings. There is none of the hardening or crusting that occurs in soil.

Larger seeds like aster, dianthus, and delphinium can be planted ¼ to ⅜ inch deep.

The tiny seeds of petunia and snapdragon may be ⅛ inch deep, while the dust-like seeds of begonia and African violet should be sown on the surface.

Water the tiny seeded kinds with a very fine spray to avoid disturbing the growing medium’s surface. Better still, water from the bottom by setting the flat in a pan of water.

One nice thing about our mixture is that you cannot overwatch if there is proper drainage in the container. Excess water simply drains away.

Remember that you have planted the seed in a sterile medium that contains no plant food. You will have to furnish food by using a nutrient solution.

We have used Ra-Pid-Gro, Hyponex, and Plant Marvel with good results. We prefer that the first feeding is at about one-half the strength recommended by the manufacturer.

This can be applied at planting or just as the first seedlings emerge. Subsequent feedings will be needed every week to ten days until the seedlings are ready to transplant.

When seedlings reach the four to six-leaf stage, they should be transplanted to other flats and spaced two inches apart each way. The same sterile medium should be used as insurance against disease.

When the weather warms up, they are taken from the flats and transplanted to the garden, where they make their first contact with the soil as big, husky plants with an extensive root system.

Rootlets and root hairs are largely intact and separate readily, with many particles of the growing medium clinging to them. Transplanting shock is far less than with plants shaken from the soil.

If you have a rare and valuable seed and want the maximum number of plants from it; if you like big, husky plants that transplant with minimum loss; if you are tired of losses from damping oil, try soilless culture. You’ll like it!

As an afterthought, here’s the last tip. Try the mixture as a rooting medium for cuttings. The results are excellent. ”

You can space your cuttings 2″ or 3″ inches apart and not even transplant them until time to put them out in the ground. Just feed ’em, get out of the way, and watch ’em grow!