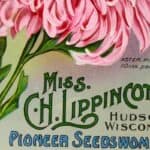 This is the month for seed catalogs. They greet us with alluring pictures of dainty bulbs, astonishing varieties in annuals and perennials, gorgeous colors, new odors, and flavors quite unsurpassed.

As we sigh with pleasurable anticipation and settle to study and enjoy, eagerly looking ahead to that first day of planting.

Let us look for a moment at some of the catalogs of earlier days in the seed industry, remembering those responsible for its great development in America.

Before the American Revolution, the settlers in the colonies were sent abroad to their friends for their supply of seeds.

In those days, their wants were simple since more than half the vegetables and flowers now grown were unknown.

It was before the days of tomatoes, eggplant, or okra, and even squashes, melons, and cantaloupes, common today, were very rare.

Plant classification was not scientific until 1735, when Linnaeus gave his revolutionary ideas on the anatomy of plants to the world, elevating botany to a usable science, and giving impetus to agricultural and horticultural affairs.

In 1784, David Landreth founded in Philadelphia, the first seed establishment in America, laying the foundation so solidly that the business is operating successfully today after 170 years.

This firm was particularly distinguished for having the earliest collection of camellias in the country.

Their catalog of 1884, commemorating the 100th year of successful operation, features on its cover a gorgeous girl in red silk and lace surrounded by flowers, fruits, and vegetables, alluringly displaying a box of Landreth’s seeds for garden and farm.

On the back of this catalog is a bird’s-eye view of the Bloomdale Seed Farm, Delaware Canal on the west, Delaware River on the coast, and the Pennsylvania railroad cutting through the middle.

His most valuable contribution to horticultural varieties was the Hovey strawberry, first fruited in 1836 and generally regarded as the starting point of commercial strawberry growing.

Joseph Breck, the founder of the famous firm still bears his name, was an original member of the Massachusetts Horticultural Society, serving as its president for several years.

Many of the early catalogs of this concern are full of charm. One of the first was a modest little book featuring tools and garden implements, quaint in their comparatively simple dc-sign.

Then follow a fascinating assortment, in delicate colors, advertising bulbs and garden flowers, lacy bouquets equal to any that adorn the daintiest of old-fashioned valentines.

“Angel of the Midnight Field Corn”

Perhaps the highlight is the catalog of the year 1886, with its illustration of the “Angel of the Midnight Field Corn.”

A stately angel, white robe gracefully draping her lovely figure, golden hair falling about her shoulders, protectively hovers over a fine crop of “Angel of Mid Night” “standing in the splendor of its bursting sheaves of verdure.”

Grant Thorburn founded the first seed store in New York City, one of the earliest in America. Mr. Thorburn had started a grocery business, which included, even as do our country stores of today, various articles of household use other than groceries.

The flower pots in his stock were hard to move, so with a true stroke of genius, he put some of his own rose geraniums in one or two of them.

He became swamped with demands for potted plants and decided to go into the plant business, which later led to his successful activity as a seedsman.

His charming catalog of 1830 lists rare greenhouse plants of that day:

In the back is an estimate of seeds calculated to crop a garden of one acre: S25.00. This is printed in French as well as in English.

There is a recipe for raspberry wine, directions for curing bacon the English way, and a bow to make a live hawthorn hedge.

Henry A. Dreer started his great seed establishment in 1838 in Philadelphia, Pennsylvania, and the business flourished until recently.

Early catalogs are items of extreme delight to horticulturists and collectors.

A seashore vista on the cover of the 1890 catalog shows a girl piquantly dressed in the high fashion of the day with a sunshade held jauntily over her shoulder.

She is meandering down a flowery path, oblivious to sailboats and sea, earnestly absorbed in Dreer’s seed catalog. The note that it “contains hints of pretty things for all places” is printed in full color.

Robert Buist joined the list of famous horticulturists in 1830, but his name became very important when he introduced the poinsettia to the trade.

His sale of the double form was the first transaction carried out by the ocean telegraph.

On its cover, one of his colorful catalogs of 1890 features Bismarck with flowing mustaches advertising Buist’s Dwarf Butter Wax Bismarck Bean.

On the back cover, men are pictured loading a large steamboat with cabbages and Buist’s Early Morning Star Peas —”The earliest pea in the world. Ready for the table in just 42 days”.

On some of the Garden Guides and The Almanac for the year 1891, in particular, Napoleon is seen in striking attitude, sturdily mounted on a fine white horse, his officers and men following.

The Linnaean Botanic Garden at Hushing, New York, was founded by William Prince in the mid-18th century and was continued by three generations of his descendants.

It was, for many years, the most extensive nursery in this country.

Here were the first attempts to produce new fruit varieties from seed. One of his early catalogs, printed on salmon-pink paper, features the new Chinese potato.

A quotation from it reads as follows:

“This most important esculent was first introduced to Europe in 1850, it having been sent to France by M. de Montigny, French consul at Shanghai in Northern China, who transmitted a few roots to some learned men.

However, it did not attract their special attention to its great value and immense importance until 1853.

When some highly intelligent botanists recognized the great advantages to be derived from its extensive culture and devoted themselves to its increase and to the development of its merits.”

Many other catalog issues, bills of lading, and a broadside offering twenty-five dollars reward for the scoundrel who palmed himself off as Mr. prince add much to the record.

Robert Manning, one of the founders of the Massachusetts Horticultural Society, established a pomological garden in Salem, Massachusetts, in 1823.

At the time of his death, this garden contained more varieties of fruit than had ever been collected in America.

Pears were his specialty, but he also had over 2,000 varieties of other fruits collected from all parts of Europe and America. The pears of Van Mons, the Flemish scientist, were introduced by him.

According to their rareness, the price for scions for grafting and budding was 25 cents for one kind, including from one to 12 scions.

James L. L. F. Warren’s “Floral Saloon and Horticultural Museum” (a startling title on any day) list in the catalog of 1845 an impressive variety of fruits, herbaceous plants, vegetables, and herbs, as well as books.

Among these are listed:

The following rich quotation is from one of their hints on transplanting:

“Previous to laying out an orchard or fruit garden the soil should be manured and pulverized to great depth. It should be made sweet, that the nutriment which the roots receive may be wholesome; free that they may be at liberty to range in quest of it; and rich that there may be no defect in the food.”

In their vast nursery in Newton, Massachusetts, John Kenrick and his son William founded in 1790, 200 acres of currants, made in 1824 1700 gallons of currant wine.

This amount increased to 3,000 in 1825 and 3,600 in 1826. Mr. Kenrick was the publisher of “The New American Orchardist,” a popular book among horticulturists of that day, which described fruits grown up to that time.

In his catalog of 1824, Mr. Kenrick states that the inoculations of the fruit trees in his list and the selections have been a work of strict personal attention.

The buds have been taken from bearing trees or gardens of distinguished horticulturists who have proved the kinds.

Andrew J. Downing, the first great landscape architect in America and by many considered the foremost figure in American horticulture, lists in his catalog 1840 wide varieties of fruits, roses, ornamental trees, and shrubs.

“The easiest and most certain method of ridding the peach tree of this disease is to search out and destroy the worm itself semi-annually.”

There is no space to touch upon the highlights of wisdom contained in the catalogs of all the great seedsmen of that day, but great pioneers in horticulture were many.

Their contributions to the seed industry vividly represent the building of America through the common interest of horticulture as it spreads its magnetic, warm green web over our lives.

These giants of old, the frontiers they exploited, and the clipper ships used in their trade are gone.

Yet we know that there is a challenge, adventure, and intriguing romance ahead for all of us interested in the great horticultural development and discovery field.