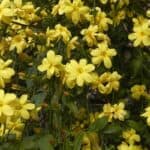 Jasmines have much in common with their sturdy and robust relatives, the forsythias, and it is a loss for northern gardens that most of them are not reliably hardy.

Winter Jasmine (Jasminum nudiflorum) survives below zero temperatures and proves a gratifying subject but is scarcely in the artistic class of some more spectacular species.

Primrose Jasmine (Jasmine many or Jasmine primulinum) has larger flowers and is more exciting as a decorative subject, but unfortunately, it is less hardy.

It will stand low temperatures for limited periods, mainly if grown in light soil and sheltered sunny locations away from winds.

This species, well known on the West Coast and in the southeastern states, could be more extensively planted with public benefit.

One wonders if its northern limit in the eastern states (tentatively placed in southern New Jersey) could not be advanced by systematic selection of hardy seedlings.

But as long as propagation continues by vegetative means, this possibility is not likely to be realized.

The introduction of Primrose Jasmine to western gardens is closely associated with a famous tree and a famous plant explorer.

One of the fascinating chapters in the history of plant hunting is the story of E. H. Wilson’s finding of the Dove tree, Davidia, in southwestern Hupeh in 1900.

The year before he started on his hazardous mission at the time of the Boxer trouble in Peking, Wilson made a journey to meet Dr. Augustine Henry of the Chinese Imperial Maritime Customs in southwestern Yunnan.

This preliminary expedition was plagued with weeks of delay and continued hot, rainy weather, but Wilson showed dogged perseverance, which characterized his career of outstanding accomplishments.

Arriving at Haiphong in French Indo-China on June 19, 1899, and traveling by boat and mule train across Tonkin and the southern tip of Yunnan in late September, he finally reached the town where Dr. Henry was stationed.

As official duties permitted, the two plant enthusiasts talked and botanized together for nearly seven weeks. Among the plants, Wilson collected at this time for the shipment to Europe was the showy yellow-flowered Jasmine, then known as Jasminum primulinum.

Despite the very unsettled conditions of the country, when his collection was dispatched from Hong Kong, Wilson started up the Yangtze on his main objective, fortified by a map Dr. Henry had drawn as a guide for locating the single specimen of Davidia he had found years before. But this is another story!

Primrose Jasmines develop into informal arching shrubs, not unlike refined editions of forsythia. Their height and spread usually range from 4’ to 6’ feet. But they agreeably adapt to more or less space as the situation permits.

Clumps that are thoroughly established and have plenty of room on all sides show some thicket-forming tendencies of forsythias but display more restraint and grace. High on the hillside above Santa Barbara, in Franceschi Park, Primrose Jasmines have developed just this way.

They are ideal subjects for covering and holding slopes and making beautiful pictures in late winter and early spring. Then, their graceful green branchlets, lightly furnished with trifoliolate leaves, are spangled with soft yellow flowers.

The leaves of Jasminum mesnyi resemble those of Jasmine nudiflorum in having three leaflets, but those of the former are more enormous and evergreen.

Their margins also differ in that they have minute cartilaginous teeth. In bloom, the two would scarcely be confused, as Primrose Jasmine has larger flowers, about ½” inches across, of a clear light yellow.

The branchlets bearing these are graceful and arching but not unduly elongated or crowded as in the other species.

The flowers of Winter Jasmine are smaller, scarcely 1” inch across, and usually show a coppery or reddish coloring in the bud and the tube of the opened flowers.

A fountain-like effect is produced by the crowded and almost compressed whip-like branchlets.

Where To Grow Jasmines Properly

Masses of fairly heavy fibrous roots make transplanting comparatively easy and a task that may be accomplished with every assurance of success if done with care.

Early spring is the best time for the work, but it can be done at nearly any season if tops and roots are balanced by appropriate pruning and if mulching and watering are managed carefully.

As noted earlier, Primrose Jasmines are excellent for plantings on banks and slopes where the exposure is warm and protected.

They are also instrumental in compositions near doorways and windows where their delicacy may be appreciated.

The accompanying sketch groups four specimens with Dwarf Boxwoods to make a doorway planting. The advantage is taken of the Jasmines’ dependability to proliferate and produce a good effect in a few seasons.

These will give substance to the composition while the Box bushes are becoming established.

When the latter reach their total growth, the Jasmines will continue to be important in the picture because of their pleasing contrast, in foliage and bloom, with the deep green of the Boxwoods.

Dwarf Box (Buxus sempervirens suffruticosa) seems to have an overabundance of names. One finds English Box (probably a dozen other horticultural varieties equally or even more deserving of this designation!).

In any case, this is the slow-growing box of old-time gardens, which, when permitted to develop, makes a rounded or flattened-globose shrub somewhat broader than its height. It often grows more rapidly than is generally admitted.

Dwarf Box is more complex than most other forms of Buxus sempervirens and nearly always is the variation one finds growing in areas where the winter temperatures will occasionally reach zero.

With primrose yellow and rich green in the picture, there is a solid inducement to plant snowdrops, scillas, and perhaps some daffodils in the front spaces of the shrub groupings. Suppose a framing of delicate vines is appropriate for the doorway.

In that case, candidates may be chosen from among several clematises, such as Clematis. paniculata, Clematis Montana, or in regions of mild winters, Clematis Armand, with showy white flowers set against lustrous evergreen leaves.