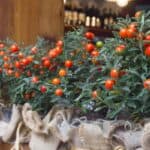 What is more enjoyable on a gray winter day than a house plant decked with red flowers or laden with bright red fruit—so gay and colorful that even a single specimen will add a glow of cheerfulness to the room?

One of the brightest and easiest to grow of the red-fruited house plants is Jerusalem-cherry (Solarium pseudo-capsicum), a radiant relative of the humble potato, eggplant, and tomato.

No Christmas decor is complete without at least one of these formal bushy plants.

Usually, Jerusalem cherries already decked with globular red berries can be bought from a florist at Christmas.

One caution, though: do not attempt to grow this plant where the air is hot and dry, or there is even a trace of illuminating gas. The Jerusalem cherry will soon drop its leaves and berries if grown in this environment.

Another species of a solarium, S. capsicastrum or false Jerusalem-cherry, is denser and more dwarfed than the species I have described above, attaining a height of only 2’ feet.

Another difference is its scarlet or red-orange berries which are oval instead of rounded. Both species of solanum are “Christmasy” and very popular for their lustrous green and red.

Another excellent house plant for Christmas decoration is the coral berry (Ardisia crispa or A. crenulata). Many florist shops carry it during the holiday season.

The coral berry is always attractive, for it has coral-red berries that are very persistent (often lasting for two years) and handsome, glossy leaves.

The firecracker plant or cigar flower (Cuphea placenta or C. ignea) originating in Mexico produces dazzling scarlet blooms through most of the winter. They are usually interesting because they have no petals but a bright red calyx with a white mouth and dark ring at the end.

One of the few red-flowering tropical orchids, the hybrid Epidendrion O’Brienianum, is claimed by one nurseryman to be “as easily grown as any geranium.” This hybrid is often grown outdoors in California.

The relatively tiny blossoms borne in graceful sprays are brilliant scarlet. This true orchid will make an arresting spot of color in any room and a conversation piece of great interest.

Fuchsias are too well known to need more than a brief mention. However, it should be said that they have not only the most exquisitely formed flowers but are also highly decorative at Christmas time if you can get them; usually, however, they are late spring and summer bloomers.

Recently, kalanchoe has become popular because of its ornamental foliage and scarlet flowers and its lack of cultural demands. Whorls of leaves at the plant’s base make a pleasing frill for the vast, flat sprays of scarlet bloom.

The most commonly grown and easily obtainable during the Christmas season is the brilliant scarlet-flowering Kalanchoe blossfeldiana.

The variety BRILLIANT STAR is incredibly colorful, with vivid red flowers on long stems that are suitable for cutting.

The chief cultural requirements are plenty of water and abundant sunshine, but protection from bright sun during the summer months and from drafts.

Kafir-lily or crimson flag (schizostylis, a member of the iris family) is a South African herb that can be quickly grown indoors for winter bloom.

Schizostylis coccinea has glowing deep crimson tubular flowers, often more than 2” inches across. They are long-stemmed and, therefore, excellent for cutting. This plant needs lots of water during the flowering season.

The bushy miniature pepper and Craig’s ornamental pepper are two fruited house plants of more than usual appeal. These annual plants can be raised easily from seed sown in spring. In the fall, lift the plants from the garden and put them in pots.

Make a note on your garden calendar to sow seeds of these house plants next spring. Florists often sell these gayly fruited little bushes for Christmas and winter decorations.

The peppers bear countless little pointed crimson peppers; Craig’s ornamental pepper has many small top-shaped fruits which, when ripening, are first white, then yellow, and finally a glowing red.