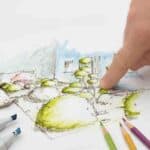 Essentially every design embodies an idea that is dynamic or static. Like a piece of music, a garden can be composed with a recurrent theme, a rising and falling cadence, and definite accents at regular intervals.

The composition may be filled with movement and lively contrasts or sink to a dead level.

Nature will always supply a touch of discord and prevent harmony from attaining monotonous perfection.

Unfortunately for us, the symbolism that in the past added a poetic meaning to the composition has almost lost its meaning.

Even the cross is lightly worn as an ornament with no remembrance of Christ’s supreme sacrifice.

In Asia, on the contrary, Chinese and Japanese gardens still illustrate an underlying philosophy of beauty where water, rocks, trees, shrubs, and flowers hold appointed places about each other and the picture.

Language Of The Flowers

A garden was the universe on a minute scale. In England, Shakespeare taught us that the language of the flowers was common knowledge. To most of us, plants merely evoke happy or unhappy associations.

I shall never forget how sentimental Mr. Rodman Wanamaker forbade my favorite combination of blue delphinium with madonna lilies because even the fragrance of their lovely white blooms brought back sad recollections of funerals.

In New England, before the Revolution, we followed English fashions as closely as possible, although differences in climate and local material made certain changes inevitable.

After we had gained our freedom from British political domination, however, French influence, at least temporarily, got the upper hand.

Jefferson and Bulfinch, like Sir Christopher Wren a century earlier, were far less impressed by English than French architecture and its offshoots. Directly and indirectly, Italian precedents cut a figure.

After his long exile with his French mother in Paris, when Charles II returned as King to Great Britain, he brought back an appreciation of foreign arts and crafts.

With Sir Christopher Wren after he had spent six studious months in France, he and the king were handed in gloves.

Previously Wren had been distinguished only as a mathematician, but this visit was the turning point in their career that led him to become the greatest of English architects.

He wrote home from Paris that the School of Architecture was beyond compare, and he spent most of his time making measured drawings of French buildings and admiring the accompanying gardens.

Later, Charles commissioned him to alter Hampton Court, in keeping with Le Mitre. He laid out the formal pleasure grounds for William and Mary.

At Williamsburg in Virginia, Wren sent plans for the Governor’s palace. designs for the appropriate gardens may have been included in the scheme.

The Formal Style of Le Notre

Pomp and circumstance characterized the pleasure grounds designed by Le Notre that formed a suitable setting for the magnificent palaces and chateaux erected by Louis XIV and his courtiers.

Landscape architecture had its laws and regulations defined by such experts as .L. F. Blondel.

His illustrations show plans that are perfect in scale and proportions, exemplifying rhythm and punctuation expressed by fountains, sculpture, and upstanding shrubs clipped to form balls or pyramids.

For instance, the formal borders of the main walks in the vast Tuileries gardens are planted in this traditional style, imposing and sophisticated, but carried out with modern varieties of vegetation.

A leading French landscape architect is responsible for the planning and planting of all the public pleasure grounds in Paris.

His word is the law; the gardeners merely furnish the plants and set them out according to his directions.

This trained expert understands the importance of a logical sequence, a color scheme, of contrasts in height and in light and shade.

In the borders, standard roses, fuchsias, heliotrope, and various broad-leaved evergreens, ball or pyramid shaped, rise above masses of such annuals as stock, snapdragon, pansies, and violas.

In contrast to the grounds open to the public are several small private courtyards, like open-air living rooms, furnished delightfully with architectural features. statuary, flowers, and shrubs.

Surprisingly enough, they can be discovered even in the heart of old Paris. One of the best is tucked away behind the hotel Pecci-Blunt in the Faubourg Saint-Germain.

The tall mansions on either side of the garden are masked by trellis work forming recessed arches.

At the rear, the boundary wall is heightened on the main axis to allow for a niche containing a wall fountain. Elsewhere this recess often includes a statue as a termination to the vista.

Of all European garden designs, the foursquare plan has survived the longest and has proved the most satisfactory.

It is reproduced in Pompeian peristyles and the earliest Italian monasteries. This rectangular enclosure was divided into quarters planted with flowers and herbs in patterns called “knots.”

At the intersection of the main cross paths in the center arose a fountain, a statue, or another dominating feature, while one of lesser importance accented the middle of each subdivision.

These striking accents corresponding to the five spots on a playing card formed a pattern known to Roman horticulturists as a quincunx.

During the Renaissance, this design remained a favorite in many parts of Europe, especially in Italy and Spain.

Badly kept up as are many of these 17th and 18th-century gardens, they might have appealed to us less in their palmy days than in their present decadence.

And even if the former flowers have disappeared, clipped laurels, oleanders, and potted orange-trees accent the parapets and the parterre. Here poets will, again and again, find inspiration and garden-lovers delight.

In England were less romantic gardens similar in plan. There are many examples laid out on conventional lines.

Topiary work was prominent early in the 18th century and quaintly survived in gardens large and small.

At Levens in Westmoreland, the pleasure dates to 1700. Here Queen Elizabeth and her maids of honor have grown to gigantic height, and roses contrast with the dark evergreen foliage.

Interest in old-fashioned gardens towards the end of the last century led to ‘excellent results.

At Longleat, the palatial mansion in the reign of William and Mary was framed by formal pleasure grounds and a spacious forecourt designed by London and Wise.

Unfortunately, Capability Brown completely swept away this appropriate layout and surrounded the house with lawns that merged into the park.

The present garden, created by an ancestress of the present Marquess of Bath nearly 100 years ago, was a forerunner of the new era.

The four-square plan, the rhythmic arches entwined with clematis, roses, and wisteria, the central fountain, the parterres, and borders, carried out in rather elaborate arabesques.

Each outside corner is punctuated by a cone-shaped yew, while on the inner angles rise trim rose bushes. Basket-shaped vases of brilliant flowers furnish other accents.

Lovers of flowers are desirous of fitting them into a pattern that will show them off as the best. advantage can employ rhythm and punctuation in an endless number of different ways.

The medium of expression may change, but without these fundamental principles, no artistic composition will seem complete.

As modern sculptors model, the statuary and horticulturists introduce more beautiful plant material, our gardens may attain greater and greater perfection, always supposing that their architects have a creative imagination.