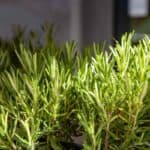 Once part of the holiday celebration, rosemary has been forgotten as a Christmas decoration.

An ancient Christmas legend tells that Mary spread the washing of the infant Jesus over a rosemary bush to dry.

The bush responded by becoming aromatic and evergreen. Another talc likens the pale blue flowers to the color of the Virgin’s cape.

Strewn on the floors of banquet halls and churches, rosemary was esteemed as a luck token.

The celebrated boar’s head was garlanded with rosemary and bay.

The botanical name, Rosmarinus officinalis, meaning “dew of the sea,” recalls the sea cliffs of the plant’s Mediterranean homeland.

Although only one species is known, there are variations in growing habits and the color of the leaves and flowers which appear in the spring.

For Christmas or anytime, gray-green yew-like foliage makes rosemary desirable for a houseplant or garden shrub.

As a cooking herb, its leaves are rubbed on pork, beef, and roasting chickens.

Rosemary livens turkey stuffing and spinach dishes too. Some cooks drop rosemary into boiling fat in which potatoes are French fried.

If no one presents you with a sprig of the Christmas herb, seeds and plants are available from nurseries that sell herbs.

Seedlings started in window sill flats, or a cold frame should be transplanted when an inch of growth has been made.

Although it attains luxurious hedge-like proportions in California and the Gulf states, rosemary requires winter protection in Northern gardens.

I have found that plants potted in autumn and winter nicely in a cool basement window.

Set outdoors in the spring, rosemary thrives in a sunny location and dry, well-drained soil.

A handful of agricultural lime worked around the roots is beneficial during the growing season.

A rosemary branch smoldering on the hearth will fill the house with fragrance. Sprigs of rosemary give a special touch to gift wraps too.

Sir Thomas More said of it: ” ‘Tis the herb sacred to remembrance and therefore friendship, whence a sprig of it hath a dumb language.”