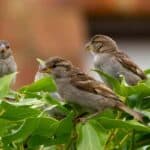 Generally speaking, the fruit of the Washington hawthorn, Crataegus phaenopyrum, is not eaten by birds in the fall or early winter. And therein lies its great value.

By January or February, mellowed and softened by the rigor of cold weather, it becomes a boon to such fruit eaters as crossbills, pine and evening grosbeaks, cardinals, purple finches, robins, bluebirds, hermit thrushes, waxwings, fox sparrows, grouse, quail, pheasants, and blackbirds.

The evening grosbeak breeds in northwestern North America, the Rocky Mountain area of Canada, and the United States. It winters over the more significant part of this area and the continent’s interior, east to Quebec and New England and south to Virginia and Missouri.

In full plumage, this is a bird of aristocratic appearance. Its name suggests the faraway land of the dipping sun and the tuneful romance the wild bird throws around the fading light of day.

The great, stout, pale yellowish-green beak and the striking color contrasts of black, white, gold, and yellow distinguish the adult male at once from any other winter bird.

They are seen for the first time amid winter snows and against a background of conifers. These strange and beautiful waifs of the northland seem somehow out of place, as would some rare and singularly exotic plant blossoming in a Labrador winter.

Grosbeaks usually come without warning very late in autumn and suddenly disappear in spring. They are swift of flight and thread their way quickly through the forest branches when on the wing.

Where people feed grosbeaks and treat them well, they return winter after winter and often spend the more significant part of each day at the feeding place.

Grosbeaks are fond of bathing even in winter and visit unfrozen parts of swift streams during this season to bathe and drink.

Like several other birds, they enjoy the sap of maple trees wherever they find it. Sometimes some of them become so tame under good treatment that they will almost eat from the hand.

A Friend To Birds

The evening grosbeak is a welcome visitor at the feeding tray and to the persistent fruit of the Washington hawthorn.

With its vast, robust bill, the grosbeak can crack the hard pits of cherries and crush sunflower seeds as quickly as birds with smaller beaks mangle the softer millets.

The Washington hawthorn is a friend to other birds and the grosbeak, providing valuable nesting sites and abundant winter food.

Its display of fruits and picturesque bare winter branches distinguish it when most deciduous trees offer little interest.

Its early spring flowers, attractive summer foliage, and autumn color merit its use as a lawn tree or where light shade is needed.

Though a native of the southern states, the Washington hawthorn is hardy enough to be grown in Nova Scotia, southeastern Ontario, and most of the United States, except northern New England and the colder Rocky Mountain and central states. It grows well in exposed positions and, as a rule, does not like much shade.

This thorn is not particular to the soil but grows best in limestone soil, a rich loamy, somewhat moist, and even potent clay.

If the soil is sandy, it should be liberally enriched with well-rotted manure, compost, or leaf mold before planting. In such ground, the hawthorn should be kept well mulched.

Transplanting should be done in early spring. Moving small plants with bare roots is relatively easy, but the larger hawthorns should always be balled and burlapped.

The Washington haw is slow-growing, eventually reaching about 30′ feet. The bold, rugged branching and horizontal lines are characteristic and make it an exciting object when the leafless form is outlined in a winter landscape.

Washington thorn may be mass planted or used for hedges. In the latter case, rather heavy pruning is necessary, but the slender 3-inch thorns make it an almost impenetrable barrier.

The attractive, abundant white flowers are borne in dense clusters. The late flowering time, mid-May to mid-June, is advantageous in those sections subject to late frosts. During the summer, the foliage is lustrous and turns brilliant red or orange in the autumn.

The scarlet fruit is a pome with a structure similar to the apple. It is about 1/4-inch in diameter, ripens in September or October, and is usually retained on the tree without shrinkage of pulp or loss of color until the following spring.