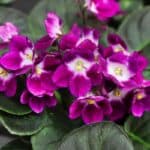 Many years ago Atlanta, Georgia, was the great center of African violet interest on October 9 and 10, when enthusiasts from 20 states met for the first time at the annual convention of the African Violet Society of America, Inc., and witnessed the staging of the First National African Violet Show in 1946.

On an opening day, most of the interest was focused on the forum on the various phases of African violet culture conducted at the luncheon meeting.

J. W. Good of Springfield, Ohio, gave a most informative talk on the commercial grower’s views on saintpaulia or African violet culture.

He suggested a mixture of two-thirds clay loam and one-third peat moss, plus a small amount of sand and a little fertilizer, as an excellent potting mixture for these plants.

As regards propagation, instead of taking quantities of leaf cuttings and rooting them in large containers, Mr. Good pots up the individual leaves in pots in which they will grow, thus saving the labor involved in transplanting rooted cuttings to pots.

He stressed the importance of always using tepid water for African violets and said that trouble was bound to follow if cold water was used.

Perhaps the most interesting part of Mr. Good’s talk was his insect and disease control discussion. He said they keep mites in check by spraying with raw nicotine solution diluted at the rate of 1 to 200 with a little soap added as a spreader.

They have had no difficulty with thrips, which causes a premature dropping of the flowers, since DDT sprays (no longer available) provided the most effective control.

Mealybugs were controlled in the greenhouse with either nicotine or rotenone spray materials.

Once mites become established, Mr. Good said, the best way to get rid of them is to spray the plants every third day until they have had six such sprays.

This system of successive sprayings, he said, is the only way to kill off the mites as they emerge from the egg stage and thus rid the plants of the pest.

As to diseases, Mr. Good has found that Fermate provided the best control of all types of African violet troubles.

The culture of growing African violets fronts the standpoint of the amateur grower was ably discussed by Mrs. Robert Wright of Knoxville, Tennessee, who also mentioned various propagation methods.

Mrs. Wright discounted the old belief that water will spot the leaves of African violets and stated that she often washes off the leaves with a spray from the hose or the faucet in the house to remove accumulated soot and dirt.

However, Mrs. Wright was very emphatic in her statement that saint paulias should never be placed in full sunshine while the leaves are wet, as this will cause the burning of the foliage, which sonic people have experienced.

The various methods of propagating African violets were discussed at some length by L. P. Lindsey of Asheville, North Carolina.

He stated that he had often obtained extra heavy rooting of leaves by notching the leaf petioles and burying them deep in the rooting medium.

In this manner, he said, he can get ninny more plants to root from the same leaf, though he admitted that the method is still more or less experimental.

Mr. Lindsey considered propagation by division of the plant a more or less simple operation and described his methods of doing so.

He said he divided his plants by breaking the crowns apart or, in some cases, by cutting them with a sharp knife. The divisions are then re-set in a proper soil mixture to be grown as single crown plants.

In discussing the raising of saintpaulias from seed, Mr. Lindsey stressed that since the seed is extremely small, it should never be covered after it is sown.

It should simply be scattered on the germinating material, either soil or a soil and sand mixture, and then very lightly pressed down.

It was interesting to note that all the speakers recommended vermiculite as an ideal material to mix in with the potting soil and use either straight or in a mixture for rooting African violet cuttings.

History And Classification Of African Violets

The evening dinner meeting on October 9 was highlighted by two well-known speakers, W. D. Holley of Cromwell, Connecticut, and Dr. W. B. Baker of the Biology Department at Emory University in Atlanta.

He stated that from what he had determined, saintpaulias were grown in this country as far back as 1893, though their rise to wide popularity has been of comparatively recent date.

Mr. Holley was quite concerned about the confusion in various classifications and suggested some means of remedying the situation through social activities.

One of these, he said, would be to set up 15 or 20 distinct varieties and publish full descriptions of these in the society’s bulletin. Then a list of varieties that are graded in between these first distinct types could be published.

Finally, a third list could be published, which would enumerate all the varieties that are truly identical to flower and foliage to the verities published in the previous lists.

He said the Classification Committee’s idea was to publish its findings as fast as new varieties were introduced. It will be a simple task to classify new varieties, he stated, as these descriptions will be based on original plants produced by the grower.

Mr. Holley said that as far as culture is concerned, growers should not try to follow any set of hard and fast rules but should try to arrive at cultural methods which will work out satisfactorily in their particular cases.

He discussed the results of growing saintpaulias in acid and alkaline soils briefly and stated that acid conditions seemed to produce better leaf and flower colors even though the African violet grows in limestone regions in its natural state.

Mr. Holley stated that there is no such thing as a yellow African violet despite persistent rumors that the color exists in the genus.

These he enumerated as follows:

Dr. Baker enlarged on these five points at some length and thus gave a most interesting discussion on the requirements of African violets based on a technician’s findings in the plant’s culture.

At the luncheon meeting on October 10, the African Violet Society of America members discussed various subjects regarding the operation of the society and, after the meeting, elected officers for the coming year.

At the African Violet Show, 77 exhibitors in the competitive section, with a total of 325 plants, entered. These represented 62 named varieties, not including some 30 or 40 displayed in the commercial growers’ section.

The show was highly successful financially and from the point of interest shown in the displays. It also served to acquaint many people with the work of the national society.