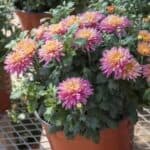 The amateur gardener should try growing potted chrysanthemums outdoors during the summer. The process is simple, and the results are gratifying, even with minimal care.

Besides, there are several advantages to having chrysanthemums in pots.

They make lovely gifts when they are in bloom in the fall.

I even know a few amateur growers who have turned professional after the first year and have made money selling their plants.

So far as use in the garden is concerned, potted chrysanthemums are the answer to the problem of putting color into the fall borders. The mums may be placed in the beds in their portable pots after they bloom.

This overcomes the usual objection that mums take up precious space in the borders all summer long without providing flowers.

Incidentally, this is one of the main reasons why chrysanthemums are not more popular as a border perennial.

Another good use for potted mums is for window gardens or greenhouse colors in late fall and early winter.

Bring the potted plants in when frost approaches; they will bloom and last until long after the outdoor mums are frozen and gone.

Before going into potted mums very far, one must become well acquainted with the types and varieties suitable to one’s locality.

Not all the classifications, nor all the various sorts of each category, fit into the potting picture.

The classifications which deserve attention are the cushions, Hardys, pompons, spiders, spoons, and exhibitions.

Varieties adaptable for potting include most of the Hardys, nearly all the pillows, a few pompons, and several spoons, spiders, and collections.

The first three types grow low and bushy, are prolific bloom producers, do not require disbudding, and give little call for staking.

With the last three, disbudding is a necessity, and these require heavy pinching back, as well as stake support. However, these previous three types are usually the most prized.

Bloom Dates Depending On Varieties

All varieties of each classification have definite bloom dates, which rarely vary, irrespective of geographical location.

The dates are based on average planting time, from April 1 to May 15, depending on the prevailing climatic conditions.

The usual bloom dates of each classification will range about as follows:

Varieties within each class will also vary. One should be sure not to choose types whose average blooming time comes after the frosts have begun.

The first decision is what form of pots to use. There are only two; therefore, choosing is simple. One choice is gallon tins, painted to improve their appearance and durability—they rust quickly when not coated.

The bottoms must be punched for drainage. These are usually obtained “for free” from bakeries and restaurants, and one is generally thanked for the removal.

Punching for drainage is best accomplished with a fruit juice can opener, making four openings in the bottom.

These cans serve their purpose well, even if they do not present the appearance of clay pots. Even so, when the cans are wrapped with attractive paper, the friends receiving the plant will be so pleased that the container will have little consequence compared to the blooms.

The other possibility is clay pots. Although they add to the looks of blooming plants, there is much to offset that advantage.

In the first place, the cost is close to prohibitive. The price will fluctuate from 18c to 28c for a 7” inch pot.

Yet, this is only a part of the objections to them. Being porous, they permit rapid drying out of their contents. Thus, the grower is faced with constant watering. I’ll cast my vote for gallon tins.

The next consideration is planting. Choose the varieties to be grown according to their bloom dates, keeping in mind the probable first frost date for your area.

Should you have chrysanthemums in your garden, you have the necessary cuttings to be rooted.

If you are still getting familiar with the process, which is simplicity itself, the following information will be helpful.

As soon as frosts have left your soil, the mum plants will evidence a new interest in life. The leaves take on better color, and small shoots appear around each plant, coming upward from the root systems.

These are the shoots that will serve as new plants after being rooted. When sprouts have reached 4” inches in height, break each one from the root, strip all leaves from the stem for about an inch from the base, then cut the stem just below a node. A discarded razor blade does the job well.

There are two rooting mediums:

Either will yield satisfactory results.

Use a large wooden box for the number of cuttings to be rooted. Should the parcel be over 3/2” inches high, it would be good to cut it down—the contents, whether sand or vermiculite, should be moistened.

The next day, put cuttings into the sand or vermiculite. After packing the mixture, space the rows, and you are ready to start. Use a rooting hormone. There are several good ones on the market, so take your pick.

Dip the ends in the hormone, shake off any excess, and gently force the cuttings into the rooting mix up to the lower leaves. If adequately prepared, each cutting is at least % of an inch to 1” inch deep in the mixture.

Put the box where no sun can reach it and wait for results. The best rooting results are affected by ample light but an absence of sunshine.

The rooting mixture must be kept damp but not wet. Rooting usually takes place in three to four weeks, depending on the time of year. Warm nights force rooting action, but chilly nights retard it.

Everyone may need to be more fortunate to have chrysanthemum plants in the garden to take cuttings from. In that case, locating someone who sells them will be necessary.

Local growers who have a comprehensive list of varieties are the ones to consult. Otherwise, it is good to correspond with growers who advertise in garden magazines.

The next step is to prepare the soil where you will plant the rooted cuttings. The best results will be obtained from a mixture of five parts sifted topsoil, one part sifted and well-rotted cow or steer manure, and one piece of ground peat moss. Should the soil be heavy, one part of washed building sand should be added.

If your plants are shipped to you from a distant grower, they may come with bare roots. If so, immerse the seeds in cold water for an hour, then plant them in the pots you have prepared.

As a general rule in deep frost zones, planting can usually be started from May 1 to May 10.

Where light frosts prevail, potting can be underway from April 1 to May 1. In no-frost areas, potting should be from March 15 to April 15.

The pots should have been filled with the potting mixture within 2” inches of the top. Each bank should be heavily watered, then allowed to stand for a few days so that the moisture will be well spread.

Trowel a hole large enough to take the plant roots when putting the rooted cuttings in place. Only set the plant as profound as the soil stain on the main stem. Mums have small root systems, and deep planting may result in stem rot.

Pack the mixture about the plants and ensure that each is erect when all are in place.

Should any be leaning? Now is the time for a correction. Then water-spray each plant and allow the pots to be in full shade for at least ten days.

Put a full inch of well-rotted manure about the main stems in each pot to serve as a mulch that will keep root systems cool in summer and conserve moisture.

As the mulch works into the soil, more must be added. After ten days, move the plants into the full sun, and keep them there.

After the first original spraying, it is only advisable to overhead spray the plants when using a leaf-feeding fertilizer.

The potting soil should always be kept damp but never wet. Mums resent being flooded. Feeling below the mulch will inform one as to the need for water. When watering, put the hose directly into the pot through the mulch.

On your plants’ first month’s birthday, spread an even teaspoonful of bone meal over the mulching manure and let the water carry it to the root systems. Discontinue all further fertilization when buds appear.

When plants have reached a height of 5” inches, each should be topped. This means breaking off at least an inch of the center growth.

It has no relation to the pinching off of branch tips. As plant growth increases, a second topping will ensure bushy plants, resulting in more and better-sized blooms.

As average growth progresses, the pinching back of branch growth becomes a regular chore, although easy.

For this critical operation, the best implementation is your thumbnail. Every couple of weeks, dating from a month after planting, the tip growth of all branches should have at least an inch nipped off.

This induces further root growth and increases the plant’s sturdiness. In addition, the plants will take on a more shapely appearance.

All tip pinching should continue until July 4, an easy date to remember. From then, the plants are on their own.

Another chore begins when the pinching ends. This is disbudding. It is not necessary with the lower-growing Hardys, cushions, or pompons, but with spiders, spoons, and exhibition types, it is a must.

Usually, seven or eight branches are allowed on a plant of spider, spoon, or exhibition mums. To remove excess branches, merely clip them off at a point just under the mulch.

Staking these plants is essential, starting with the training of each chapter to a slightly outward tendency.

Here’s how to do it.

Get a bundle of the longest reed stakes obtainable. They should not be over a quarter of an inch in diameter.

Each plant may require different staking, so only one plant can be handled appropriately at a time.

Insert one end of the stake in the potting soil and set it to follow the outward lean of a branch.

Then fasten the branch and stake together, with all units having the same branching angle. Several products are available for tying branches to stake.

All follow the same general pattern: a thin, pliable wire encased in a ¼” inch-wide weather-proof tape. When applying, do not fasten tightly, as room for further branch growth should be considered.

When buds begin to show on the spoon, spider, and exhibition varieties, what is known as the crown bud will appear.

It will be immediately recognized as leaves surround it. Using that overworked thumbnail, entirely remove the crown buds.

Shortly afterward, the terminal bud will show itself. This is the one to retain. It is also easily recognized, being surrounded by smaller buds. This latter, too, is to be given the thumbnail treatment.

This action concentrates the plant strength on the terminal bud, resulting in a large and perfectly formed bloom.