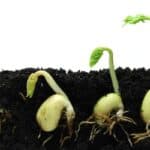 As a rule, the principal reasons for treating seeds with chemicals before sowing them are to prevent seed decay and damping-off of seedlings.

During the past year, however, I have been treating different kinds of seeds for another reason—to give the young plants an added boost from the start.

How To Treat Seeds

This is achieved by soaking the seeds for an hour or two in a complete nutrient solution containing all the elements required for good plant nutrition.

The seeds absorb enough of these elements to produce better germination and far sturdier seedlings than those grown from seeds soaked only in water.

In some cases, the added boost given to plants developed from nutrient-fed roots is so significant that they hold their advantage right to harvest time, giving larger yields than the same kind of plants grown from un-soaked seed or seed soaked in water only.

The accompanying photograph, taken especially for Popular Gardening by our staff photographer, E. N. Mitchell, shows the difference any gardener can secure with tomatoes.

The two lots of seedlings are just over two weeks old. All came from seeds harvested from one tomato fruit.

At the start of the test, the sources were divided into two equal portions. One portion was soaked in tap water and the other in Rapid Gro solution at the rate of an ounce in a gallon of water.

Both lots were removed from the liquids within two hours and spread out on a newspaper to dry. Several days later, each lot of seed was planted in separate pots at the same depth and in the same soil.

The difference in the number and size of seedlings in favor of the Rapid Gro-treated seed is noticeable. This solution not only increases the seedlings’ size but also helps reduce seed decay.

I have also obtained the same striking differences with grass seed soaked for an hour in the same concentration of Rapid Gro solution. Last fall, a new section of my lawn seeded with treated seed came up quicker and thicker than an untreated portion.

I am told that wheat, corn, and oats treated with the same material in the Pacific Northwest show a similar response. Before sowing increased yields from five to seven bushels an acre, I soak the wheat seeds in Rapid Gro solution.

Along the same lines, a British research worker, W. 0. Roberts, during World War II, developed a method for economizing on fertilizers used on nutrient-deficient soils by soaking cereal seeds in nutrient solutions containing the deficient element at a sufficiently high concentration to supply a large number of the total requirements of the plants.

Surprising as it may seem, I am also obtaining faster and better rooting of herbaceous cuttings and faster-growing and more vigorous plants as a result of completely submerging the cuttings in Rapid Gro solution before sticking them in the rooting medium. But that’s material for another story!