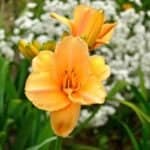 The extensive grounds and gardens of F. Edgar Rice in Bartlesville, Oklahoma, were complete with separate daylily, rose, formal, and patio gardens knowingly designed and meticulously maintained – and was an inspiring study for gardeners.

Rice, a successful engineer, applied the precise skill of his profession to achieving near garden perfection.

By far the loveliest spot of all was the 50 x 100-foot hemerocallis (day lily) garden, for which the other garden areas provided a delightful setting; decades ago, the fame of the garden jewel spread until it became a veritable mecca for daylily fans from hundreds of miles around.

Each June, on a designated weekend, some 400 people from as many as 20 states come to see hundreds of daylily plants in their peak bloom.

Of the more than 350 varieties grown, some 300 were in flower at “open-garden” time. It was there that visitors could view all the best new and old varieties, whose form, substance, and behavior they could conveniently compare.

Each daylily was a personality to Rice, who carefully selected new varieties. Paying regular visits to originators, he often chose the best new types and added them to his collection long before they were in commerce.

The 6’ foot wide borders and huge rectangular beds in the garden included such breath-taking blooms as:

In the seedling bed, daylily No. 51-1, originated by Mr. Rice, showed great promise. Deep red with an orange throat, this medium-sized bloom is a real eye-catcher.

For the convenience of visitors desiring the names of certain varieties, each is plainly labeled, while the grassy walks of Zoysia made for comfortable strolling. This weed-free grass is so thick that walking on it is like stepping on a rare oriental rug.

On the street side of the daylily garden, perennials bloomed from spring to frost for the pleasure of passers-by: Phlox subulata and Carolina, plumbago, and, you guessed it, daylilies.

The high west fence of the garden was covered with wisteria, while directly opposite, the overly friendly rose garden climbed right over the high north wall providing a backdrop of rich red.

The garden was a beauty in its own right, boasting many new roses and old favorites: Silver Moon, Dr. Huey, American Pillar, Mary Wallace, Paul’s Scarlet Climber, and Mermaid.

It was tied to the hemerocallis garden by a walk of native stone, as were the other gardens, each transition accented by two Chinese junipers “sentinels.”

Following the main walk from the daylily garden, visitors passed the rose garden on one side and quickly found themselves in the formal garden. This outdoor living room contrasted remarkably with the daylily garden (and the roses).

It was walled with tall evergreens frosted in front with French lilacs and thickly carpeted with Zoysia grass. A lily pool, sparked with hybrid water-lilies and goldfish darting in and out of the foliage, made for a refreshing center of interest.

A stone bench terminated the garden, beyond which visitors could catch glimpses of rosy drifts of azaleas tucked away in the shade.

Beyond the formal garden and adjacent to the house was the colorful patio garden, a stone-paved patio and terrace area ideal for outdoor dining.

The shady borders boasted many of Mr. Rice’s 100 or more azalea shrubs, while close by a triangular bed fairly froths with pink caladiums. Some two dozen potted tuberous begonias outline the terrace.

The shade was provided by native birch and willow oak, with Magnolia grandiflora and sweet gum trees.

A wall of Chinese junipers, with a frontal border of French lilacs, assured privacy from the formal garden behind, while a frame of Korean box screened the driveway on the north.

Story Of The Garden Development

The story of the development of the gardens is an interesting one. The year 1930 marked the beginning. At that time, the lily pool was constructed, and the first plantings were made in the 30′ by 45′ foot plot, which later became the formal garden.

The same year, an adjoining 50’ x 100’ foot lot was purchased and promptly converted into a tennis court for the four Rice children and their friends.

1937 saw tennis days over for the young kinds of Rice, and the court site transformed into a planted area. Soon flower borders bloomed like bright ribbons along a high fence, while the grassy center area accommodated social events.

The war years changed the plot – the transformation from a flower to a vegetable economy. The planted borders were widened to 6’ feet, and four 11′ by 31′ foot beds were made in the lawn area – all planted with vegetables.

Flowers took over once again at the war’s end, with hemerocallis outstripping the others until the one-time tennis court became the delightful hemerocallis garden.

The triumph of the daylilies is itself an intriguing little story. Six hemerocallis plants purchased in 1938 were Mr. Rice’s oh-so-innocent start.

During the war years, he immediately approved their performance and managed to add a few more choice varieties, squeezing them in where vegetables agreed to make room.

And he found himself becoming more and more impressed with the garden value of this flower – its free-flowering beauty and fantastic adaptability.

The war’s end, which meant a lot of vegetables, saw a significant increase in daylily plantings and the actual start of the hemerocallis garden.

Every year, Mr. Rice would add some 50 to 75 choice new plants, regularly discarding many others, until his hemerocallis collection was one of genuine distinction, attracting widespread interest.

That’s how a passion for plants and garden details makes someone a giant in the world of plants.

The day lily is a favorite flower in many gardens today. The F. Edgar Rice Memorial Award is a coveted prize in the world of daylily achievements. It is interesting to see awards named after individuals.

But, how about rolling back time to take a glimpse into the garden of this former President of the Hemerocallis Society who decades ago fell in love with the daylily and made them his passion.